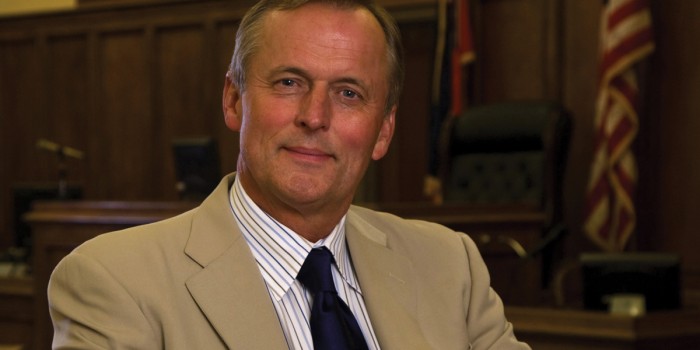 Lawyer and New York Times best-selling author John Grisham will visit the campus of Wake Forest University on Sept. 14, 2010, as a guest of the law school and the first speaker of the academic year in President Hatch’s Voices of Our Time series. Grisham will talk about why he chose to tackle the issue of wrongful convictions and answer questions from students and faculty from the law school’s Innocence and Justice Clinic. The event, at 4 p.m. in Wait Chapel, is free and open to the public. Grisham says he became enamored with Wake Forest during a campus visit in the summer of 2004 with his daughter who was touring North Carolina universities. “I love Wake Forest,” he said. “I didn’t want to leave.”

No one would believe it. That’s what John Grisham thought when he first heard the stories of Ron Williamson and Dennis Fritz, stories that would eventually become his first and only non-fiction work, “The Innocent Man.”

The lawyer and New York Times best-selling author has been writing fictional legal thrillers for more than 20 years, but the tale of murder and injustice in a small town in Oklahoma had more twists and turns than Grisham says he could have ever dreamed up.

“I am always motivated by story, whether it’s fiction or non-fiction,” he said in a recent telephone interview from his office in Charlottesville, Va.

Grisham was drawn to Williamson’s story after reading his obituary in the New York Times in 2004.

Normally when I finish writing about an issue, I am done. But this one is under my skin.

“He was exonerated in April 1999 so he was one of the first high-profile, death-row DNA exonerations,” Grisham said. “I think what made it newsworthy were the same reasons I was struck by the story. Here was a guy, a white guy not from the poor side of town, and a local sports hero, whom everyone thought was going to be the next Mickey Mantle because he was from Oklahoma, too. And for the town to completely devour him, if I wrote it as fiction, no one would have believed it. The truth is much better than fiction. I never thought about fictionalizing it, the story was much too good.”

Origins of his cause

Grisham admits that he had never thought about wrongful convictions or exonerations until he started working on “The Innocent Man.”

“I had been a lawyer for 10 years and I had a lot of guys go to prison, but I never had a client I thought was wrongfully convicted or mistreated by the system,” he explained. “Where I lived in Mississippi everybody played fair. Then I got involved in the Dennis and Ron story and now it’s the one issue that still keeps me awake at night.”

In 1987, the two men were arrested and charged with capital murder in the death of a 21-year-old cocktail waitress in Ada, Okla., that occurred five years earlier. Despite the fact that there was no physical evidence and the prosecution’s case was built on the testimony of jail house snitches and junk science, Fritz was found guilty and given a life sentence. Williamson, who had been drafted by the Oakland A’s in 1971, was sentenced to death.

Grisham said he was shocked at the miscarriage of justice he uncovered in the course of writing the book. “It was a combination of screw ups that could have been prevented.

“One thing I realized, the presumption of innocence in this country is a joke. It’s a presumption of guilt. That is something that continues to bother me. I guess the one thing that really kept coming home was the absence of a fair trial. We all believe trials should be fair and theirs was not even close to being fair. How can the system be so broken? It just never happened to me. I had a lot of criminal trials and I was in the pits every day but as far as I was concerned everything was fine. Then I dropped off into this fictional world. But this thing slapped me in the face.”

The same mistakes that occurred in “The Innocent Man” are happening every day, Grisham says.

“We have an enormous prison industry that the states can’t afford. If we could pass a lot of reforms, the savings would be enormous. Nothing is as costly as a wrongful conviction and incarceration.”

“Normally when I finish writing about an issue, I am done,” he said. “But this one is under my skin. I’ve had a lot of fun going around to different innocence projects and to the extent that I have a cause this would be it.”

The man that USA Today has dubbed a “legal literary legend” says he found the process of writing a non-fiction piece much more difficult than his other works. For example, it typically takes Grisham about six months to write a fictional novel. “The Innocent Man” took him 18 months.

He told Wake Forest law school Dean Blake Morant at the time that writing a nonfiction work proved to be more challenging than he had imagined. “I met Mr. Grisham when I was at Washington and Lee,” Morant said. “When I asked him to come to Wake Forest a couple of years ago he respectfully declined due to his work on ‘The Innocent Man.’”

It was the research that bogged him down, Grisham said. “I was constantly on shaky ground not knowing if I had a great story from a shaky witness,” he said. “It was also the sheer volume of paperwork. I think if I would have known what I was facing when I jumped off the cliff I probably wouldn’t have done it.”

His diligence paid off in the end. Having a hunch that he might get sued for defamation, Grisham meticulously made sure his story was as accurate as possible. Lawsuits filed by a prosecutor, an investigator and a state crime lab finger print expert after the book was published were quickly dismissed.

But perhaps it was his readers who experienced the biggest shock, Grisham said. “I don’t read reviews and I have limited contact with people reading my books, but the most common reaction I got after writing ‘The Innocent Man’ was one of disbelief. People thought I was off writing fiction again. They couldn’t believe the system was broken so badly.”

Grisham has written at least a book a year since “The Firm” came out in 1991. His newest novel, “The Confession,” is scheduled for release Oct. 26. Not surprisingly, given his growing interest in wrongful conviction issues, the new book explores the days leading up to the execution of a man who has been wrongfully convicted.

“I wanted to take a fictional story and walk the reader through a wrongful prosecution,” he said. “I wanted to show how these things happen and how they can be prevented if authorities would play straight and that’s what I tried to do.”

What the future holds

Grisham believes that the volume of DNA exonerations in the United States is changing the public perception. “We’re making progress because of the 255 guys who have walked out of prison,” he said.

North Carolina made history in February when the state’s Innocence Inquiry Commission referred Greg Taylor’s case to a three-judge panel that determined Taylor was innocent of the murder he had been convicted of 17 years ago. Grisham happened to be in Chapel Hill the day Taylor was released.

“North Carolina is leading the world as a model because of the way they have structured their innocence commission,” Grisham said. “Think about how many of these cases are changing jurors. They are more cynical of prosecutors and judges today. The junk science is fading away because people are using DNA to solve crimes.”

Barry Scheck, who is on the board of the National Institute of Justice’s Commission on the Future of DNA Evidence, likens the work of innocence commissions across the country to the Civil Rights Movement, according to Grisham.

“We’ve reached a tipping point,” Grisham said. “These laws we push in states where we have small victories are piling up. Hopefully we will be able to get rid of the causes of wrongful convictions. In the meantime, all the innocence projects are going to help these guys.”

The public doesn’t realize there are 2.1 million people in jail and prison right now in the U.S., Grisham says.

“That’s the highest incarceration rate in the civilized world. Take that number and if only 2 percent or 5 percent are innocent, whatever number you feel comfortable with, that’s still a huge number of innocent people, tens of thousands of innocent people, who are wrongfully imprisoned. Take the Ronald Cotton case. While he was in jail, the real rapist raped and beat seven other women because they convicted the wrong guy. This is not a liberal issue. When you send the wrong guy to prison, the guilty guy goes free. We want the right guy in prison.”