A ‘Conversation With …’ series to host author and lawyer Ann Scales on Tuesday, Oct. 5 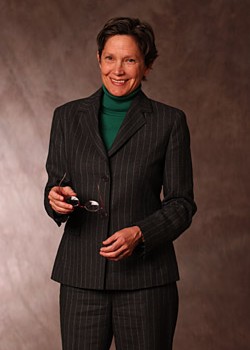 The founder of the school of “feminist jurisprudence” will be the Wake Forest University School of Law first “Conversation With …” speaker for the 2010-11 academic year.

Ann Scales is a lawyer and a law professor at the University of Denver’s Sturm College of Law as well as the author of “Legal Feminism,” which highlights sex discrimination in tort litigation and sexual assault in college athletic programs, among other topics.

The “Conversation With …” Ann Scales represents the 11th anniversary of the speaker series, which brings distinguished lawyers to campus for a unique conversation about their lives in the law. As part of the event, students have the opportunity to hear interesting details about the speaker’s life and career and ask questions. In recent years, the series has featured several prominent figures including U.S. Supreme Court Justice Ruth Bader Ginsburg and former U.S. Supreme Court Justice Sandra Day O’Connor.

This academic year’s “Conversation With …” series kicks off on Tuesday, Oct. 5, at noon in Room 1312 of the Worrell Professional Center. The event is open to the law school community.

The discussion will be moderated by Professor Shannon Gilreath. A light lunch will be served.

Scales’ courses include Constitutional Law, Civil Procedure, Torts, Products Liability, Jurisprudence, Gender and Law as well as a seminar on Pornography and Racial Hate Speech.  She is a founder of the school of “feminist jurisprudence,” having coined the term and first published work on the topic in 1981.

Scales is no stranger to Wake Forest having spent much of her childhood around the campus community. Her father, James R. Scales, served as the president of Wake Forest University from 1968-1983. She graduated from R.J. Reynolds High School, going on to earn degrees from Wellesley College and Harvard Law School. Scales’ family lived in Oklahoma, where she was a rodeo rider, before moving to the Winston-Salem area.

Howard Twiggs, alumnus, trial lawyer and ATLA president and lawyer of the year

Chief of Staff and Chief Operating Officer of

Gill Beck, Assistant U.S. Attorney on Board of Governors on N.C. Bar Association