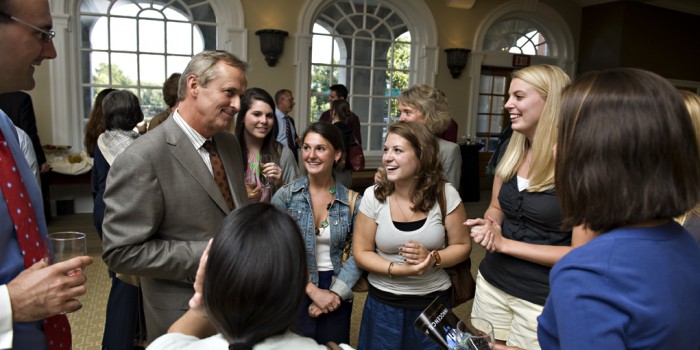 Get your client a fair trial.

That was just one of the messages that New York Times best-selling author and lawyer John Grisham wanted students at the Wake Forest University School of Law to take away from Tuesday’s panel discussion about “Innocence and Justice.”

The discussion included wrongful convictions, a broken justice system and the N.C. Innocence Inquiry Commission, in front of an audience of about 2,000 in Wait Chapel on Tuesday afternoon. The event was co-sponsored by the law school and the university’s Voices of Our Time lecture series.

Also participating in the panel were Blake Morant, the dean of Wake Forest’s law school; Carol Turowski, co-director of the school’s Innocence and Justice Clinic; and two third-year law students, Jessica Hollenbach and Mimi Kendrick. Hollenbach plans to become a prosecutor while Kendrick intends to pursue a career as a district attorney.

Public trust in the criminal justices system has been shaken by the more than 250 people cleared in the U.S. through DNA evidence, according to Grisham.

“Whatever case you take, especially a serious case, especially a death-penalty case, your job is to fight tooth and nail to get that client a fair trial,” he said.

Taylor was exonerated in February after the judges on the commission voted unanimously to undo his 1993 conviction of murdering a prostitute in Southeast Raleigh.

North Carolina is home to the only state-run agency in the country dedicated to verifying claims of innocence from convicted felons.

Best known for his legal thrillers, Grisham has lent his legal prowess and celebrity to national efforts to re-examine convictions where doubt exists. He became involved in what he called the innocence movement while since researching and writing his only nonfiction book, “The Innocent Man,” in 2006.

He got the idea for the book after reading an obituary about Ron Williamson, an Oklahoma man wrongly sentenced to death row He encouraged law students to become involved in innocence commissions because he wasn’t fully aware of how widespread wrongful convictions were until he began his research on the book, despite being a former public defender in Mississippi.

“I realized there are a lot of innocent people in prison, and most Americans don’t believe that, but it’s true.”