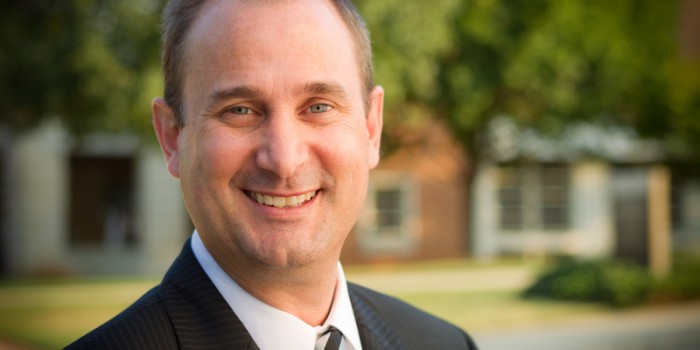 Jon McLamb’s connection to Wake Forest University goes way back. It also has some interesting twists and turns.

For example, the new assistant dean of development for the Wake Forest University School of Law worked with ISP Sports in Atlanta as an associate general manager representing Georgia Tech.  One of the law school’s alumni, Ben Sutton (‘83), is the chairman and chief executive officer of ISP Sports, which is based in Winston-Salem.

The ISP position led McLamb to raising funds for the George Tech Athletic Association, where he was the assistant director for the Alexander-Tharpe Fund. Following Georgia Tech, McLamb held numerous roles in athletic administration and coaching at Agnes Scott College.

In 2005, McLamb moved to Georgia State University as the associate athletic director responsible for development and marketing. During his first year, he set the record for most funds raised in the history of Georgia State Athletics while implementing a Founding Life Member giving level. He then played a pivotal role in assisting Georgia State in establishing their first-ever football team in school history while working with three-time NFL head coach and Georgia State football consultant Dan Reeves to secure funding from alumni and area business leaders. McLamb later became the director of regional development for the university responsible for soliciting major gift prospects with a specific focus on university alumni and friends in the Carolinas and Virginia.

“My wife and I wanted to get back to this area where I am originally from and Georgia State generously created a regional role for me,” he explained. “I essentially went from the athletic side to the university development side. It provided me with good experience and valuable insight into what we are doing at Wake Forest with our development efforts and regional development directors in the key cities of Charlotte, Raleigh, Atlanta, New York and Washington, D.C.”

McLamb moved back to his family’s farm outside Lexington in the spring of 2008. He and his wife, Kerri, wanted to be closer to family. They are expecting their first child in December. “It’s going to be a surprise,” he said. “We don’t want to know what we are having.”

A 1992 graduate of East Carolina University and a Davidson County native, McLamb grew up in the shadow of Wake Forest University.

“I always admired Wake Forest from afar, so when this opportunity presented itself it appealed to me,” he said. “And the more I looked into it and met with the dean and others I felt like I had for the first time a real-close up of the inner workings of Wake Forest and the fabric of its underlying mission and Pro Humanitate. I was extremely impressed. I had never seen it fleshed out through the people here before. I came away with a greater appreciation for the university and saw what a terrific opportunity there was here. And the idea of building on the existing relationships and developing new relationships to advance the Wake Forest School of Law appealed to me greatly. I saw the achievement and success of the law school and the potential for even further growth.”

Among McLamb’s goals for his new role is to further engage our alumni, faculty, the parents of students and friends of the school by sharing Dean Blake Morant’s vision and aligning individual interests with this vision.

“My ultimate goal is for us to reach a level of philanthropy for the law school that provides Dean Morant, our faculty and our students the resources needed to become one of the premiere law schools in the world,” he said.