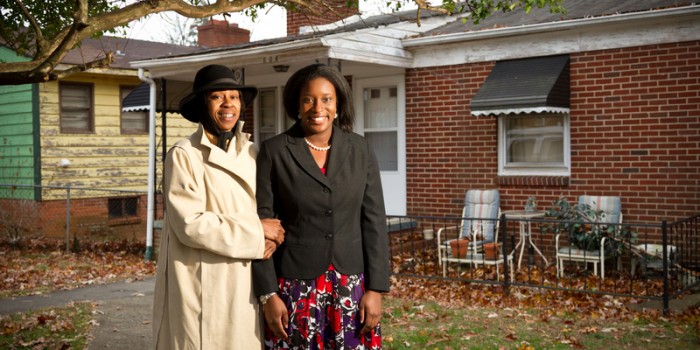 Wake Forest law student Ashleigh Wilson ('11), right, poses with homeowner Tonya Williams outside her home in Winston-Salem on Dec. 2, 2010. Wilson, a student in the Community Law and Business Clinic, was successful in preventing foreclosure proceedings with help from Professor Steve Virgil and Legal Aid of N.C.

Tonya Williams will be home for the holidays this year, thanks in no small part to the efforts of Wake Forest University School of Law’s Community Law and Business Clinic, Professor Steve Virgil and Legal Aid of North Carolina (LANC).

Williams was among the more than 70,000 families in North Carolina facing foreclosure on their homes by the end of the year. According to the North Carolina Justice Center, home foreclosures are on a record-setting pace in the state and the Triad. Mecklenburg County has the most foreclosures so far, while Wake, Guilford, Forsyth and Union counties follow.The CL&BC, however, is trying to stem that tide. Working with referrals from Legal Aid, each student in the clinic this fall got at least one foreclosure case. Armed with training from Legal Aid and Professor Virgil, who is the CL&BC director and a practicing attorney, the students went to work on their cases.

“Some of the cases were really urgent because some were already in default,” Virgil said.

Williams was faced with losing her Winston-Salem home, which she inherited. She had taken out a home equity loan to fix up the house but was unable to make the payments after losing work as a self-employed housekeeper and home healthcare giver when the economic downturn hit.

Professor Virgil gave Ashleigh Wilson (’11) Williams’ case. Under Virgil’s supervision, Wilson was able to get Williams’ monthly payment cut nearly in half from $506 to $269.

“This will allow me to stay in my house,” Williams said. “I don’t know what I would have done without Ashleigh’s help. I am so relieved. I sleep better now.”

When Williams was running out of hope of staying in her home, she called Legal Aid, where she was referred her to the CL&BC.

“I was behind on my home equity payment and the lender was going to foreclose,” Williams explained. “Ashleigh was wonderful. She made it personal. We met every week and she was always so positive. I couldn’t have done this without Ashleigh and the Community Law and Business Clinic.”

Williams was fortunate that her lender was local, which made it easier to get a loan modification.

“It was difficult to determine her income to see if a loan modification was even feasible because she was self-employed but her clients kept great records so we were able to create a profit/loss statement to show her gross income,” Wilson explained. “We had to submit letters from her employers and I had to draft a letter to her lender regarding why her income had dropped and propose new terms including a lower interest rate, which they agreed to drop. Her interest rate went from nearly 12 percent to 2 percent. If we hadn’t put something in place she would have been out by Dec. 16.”

Wilson said the experience was personally rewarding for her as well because “it was the chance to see the fruits of my labor actually help someone. I really enjoyed it. It also helped me realize how powerful you are as a lawyer. It made me feel like I was holding the golden ticket.”

“The first two years of law school is in the classroom learning and a lot of theoretical but through my work with the CL&BC I got to see everything fall into place. It gave me confidence to know when I step out after graduation, I have some core competencies. I can draft contracts and form business entities.”

Virgil points out that helping families out of a home foreclosure is just one of the efforts the CL&BC is working on to help move the area toward economic recovery. The CL&BC works primarily with business start ups and organizations engaged in community economic development.

“These businesses by people who have an entrepreneurial spirit are creating jobs where people live,” he said. “Some of them are food-related and for some communities that is where the best hope for job creation exists, especially in rural communities where it’s hard to bring in a big plant. It’s easier to create a business yourself that is farm-based or agriculturally-based and to create a decent job that will support a family. We try to focus our work on those small-scale entrepreneurs but we also do a lot of work with nonprofits such as food banks and pantries, the need for which has increased as a result of the economic downturn. If we can help the pantry we are helping the families who are served by that pantry. The clinic serves as a full-service law firm for both of those models.”

Wilson is going to volunteer as part of the AmeriCorps program during the spring semester at the CL&BC where she will act as the liaison between the clinic and Legal Aid on the foreclosure cases.

“We will do whatever we can to keep families in their home,” Virgil said, adding that his clinic has taken some 60 foreclosure cases from Legal Aid. “We have already had a number of successes where the lender has agreed to a longer term or a lower payment.”

“The goal is to keep people in their houses,” Virgil said. “It’s really key to keep a house occupied and the family with housing. It’s such a tremendous benefit not only to the family but also to the broader community.”

When a house is foreclosed on, the neighboring houses are worth less, which means an immediate negative housing value. And when a family loses housing they lose more than an asset and their home equity. Long-term home ownership means education for children and college participation and success rates. The home becomes not only a resource it becomes an indicator of long-term gains. Keeping a family in a home benefits the family, the children and the neighborhood.”

Hazel Mack is the Triad’s regional director for Legal Aid as well as the head of the statewide Legal Aid of NC (LANC) Mortgage Foreclosure Defense Project. Mack said she turned to the CL&BC for help when the foreclosure cases started pouring in.

“We are just inundated with so many of these cases,” she said. “We need all the help we can get. Foreclosures are popping up like weeds and the amount of documentation is overwhelming. We already had a relationship with Steve, who had come to our private attorney training on these foreclosure cases and taken some of his own. It just made sense to get the students involved because they learn so much and that’s what it’s all about.”

Mack said the average homeowner cannot get through the loan modification paperwork on their own. “We need bodies and the students are perfect because they are educated and they are trained and they can do it,” she added.

Virgil and Mack met this week about the next team of students beginning in the clinic in January and the cases they can take on.

“If we had the supervision, every student at the law school could have a case, that’s how prevalent this problem is. Even attorneys who do other areas of work in our office have to take on these cases, that’s how bad it is. But how do you turn them away? The difference between having a home and not having a home is devastating.”