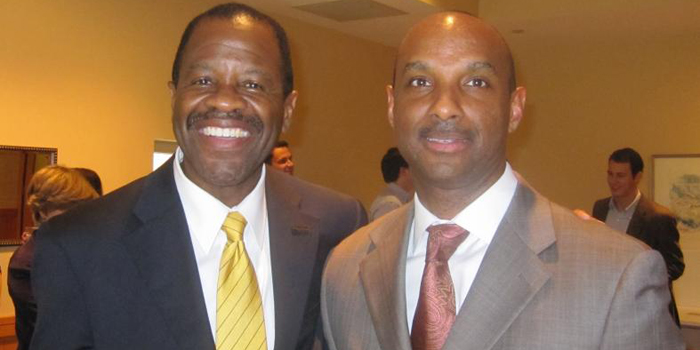 Paul Lancaster Adams (’93) says one of the interesting things about being at Microsoft is working with such remarkably smart and talented people.

He says it’s amazing to find himself on a conference call with colleagues in countries all over the world.  As a litigator who has focused primarily on labor and employment law and championing diversity in the profession throughout his career, Adams is also happy to be at a company with an enormous employee and customer base, which is as diverse as the world itself.

Adams joined Microsoft in 2008 as Associate General Counsel.   He credits his success along his career path to advice from his mentors and a willingness to take risks when unexpected opportunities present themselves.  Adams visited Wake Forest this fall to share his career experience with students as part of the law school’s Professionalism series.

“I think if you look at my career, I have never been afraid to take chances and try new things,” he says.  “After all, what better person is there to gamble on than yourself?”

In his current position at Microsoft Corporation, Adams directs the corporation’s labor and employment litigation.  He is also in charge of other significant litigation and class action matters, corporate internal investigations, world-wide, and diversity outreach initiatives.  For Adams, diversity issues and labor and employment law are wrapped up within a civil rights practice.

“Although I’ve always considered myself a litigator, my civil rights practice actually started when I served as an Assistant City Solicitor for the city of Philadelphia,” he says.

Adams began working in the federal trial unit in the city’s Law Department in 1996, where he defended the city, the mayor’s office, the police department and prisons as well as their personnel.

Before Microsoft, he became a partner with the Philadelphia office of Montgomery, McCracken, Walker and Rhoads.  As an associate in 1999 with his first law firm, Rawle & Henderson in Philadelphia, he says he inherited a number of matters, several of which turned into high profile cases.  In one such case, he defended a world-renowned entertainment group and famous wrestlers who were charged in a $20 million lawsuit over a dangerous fire stunt that went awry and severely burned a fan.  Adams discovered that in his enthusiasm, the fan had crossed the safety zone and literally got into the line of fire.  A jury exonerated his clients of any wrongdoing.

Adams has a solid competitive streak.  He finds starting a jury trial exhilarating and the closest thing to “game day” for him.

“When in the middle of trial my client says, ‘Paul, I have confidence in you and I believe the jury will go our way’ while there is much on the line and the court is urging settlement – and then the outcome is favorable,” Adams says that’s when he knows he chose the right career path.

Adams credits his career success to the enthusiasm former Professor Butch Covington had for the law, and says he was always excited to walk into Covington’s contracts law class.

“You knew he truly loved the law when he taught, and he was able to be engaging even while moving through less interesting subtopics.  I learned to love the law through his example, and if you love the law, desiring to develop your craft comes naturally.”

Blake Hurt (’11) plans to be a patent attorney, and enjoyed the opportunity to meet with Adams during his recent visit to Wake Forest.  Hurt was especially interested in what Adams had to say about how he handles the issue of trademark secrets with new and former employees in the fast-moving computer industry.

“I was also inspired by his almost fanatical attachment to taking risks, to have no fear and take opportunities as they come to you,” Hurt said.  “People get married to one thing, and when they get so far in their training and career, they don’t want to change.  I think the ability to switch up and change is pretty neat.”

Emily Cantrell (’11) also took Adams’ message to heart.  “I think he really drove home the point that there’s really no one-size-fits-all for someone with a JD.  This really is the best time to take risks, because we don’t have anything to lose.”

Cantrell is interested in working with foundations, and took the opportunity to ask Adams about the Gates Foundation.  When she asked if he had any suggestions for how to position herself with foundations, she suddenly found herself in a mock interview there on the spot.

That’s the kind of engagement Dean Blake D. Morant wants students to experience through the new professionalism series that is part of the Applied Legal Theory- Law In Action program.  Morant says the goal is to invite accomplished attorneys to talk with students about the process of becoming a lawyer and about issues that will make them good professionals.  The series has been wildly successful, and Morant says it is helping students understand the job market as well as the rudiments of professionalism they’ll need when they begin their career.

Morant says that students today must be entrepreneurial in their careers, and be prepared to take advantage of opportunities as they present themselves, including accepting jobs they might never have imagined themselves doing.  Morant says that in describing his career, Adams gave the students the idea that their career can take different paths.

“That’s good,” he says, “because opportunities come and can take you in different ways.  Paul Lancaster Adams’ career is emblematic of that.”