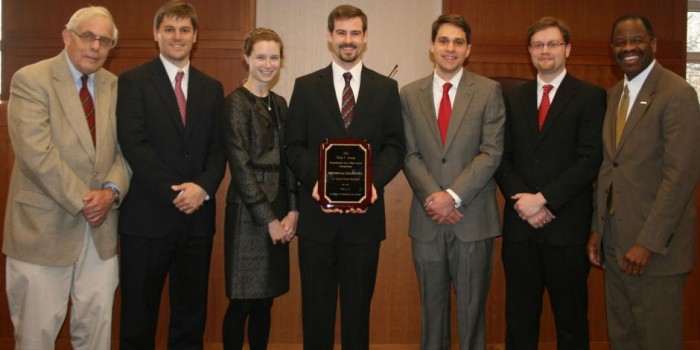 The Wake Forest team of Douglas Ansel, team captain and of counsel; Alexander Lutz; Christopher Maner; Zoe Niesel; and David Senter Jr. won three of four preliminary rounds, defeating the College of William and Mary, St. Mary’s University and Nova Southeastern University law schools.  In the quarterfinals, Wake Forest defeated South Texas College of Law, and in the semifinals, Wake defeated the University of Florida to advance to the championship round against Virginia.

“After all of the team’s hard work in preparing for the competition, I am so pleased with our performance in Houston,” Ansel said. “The entire team can only be described as ecstatic about our success.”

Twenty-four law schools represented by more than 100 students participated in the regional competition, explained Professor George Walker, who is the team adviser.

The International Law Students Association, whose members include law students and young lawyers, sponsors the competition.

Alexander Lutz earned fifth place among all oralists, while Zoe Niesel placed 13th and David Senter 25th.  Preparation for the regional competition involved research and preparation of memorials (i.e., briefs) for both parties in the case over two semesters, and numerous practice oral arguments, Walker said.

The team now heads to Washington, D.C., for the international rounds, which will include teams from law schools around the world, during the last week of March.  The Jessup Competition is the largest appellate moot court competition in the world; 500 law schools from more than 80 countries participate every year.

The team was helped by faculty members as well as Allen Mauldin (’10) and Mark Atkinson (’98), both of whom are former Jessup Moot Court competitors and volunteered to be practice round judges, Walker said.

“My thanks to each of you, and the two alumni, for taking time to prepare for and judge practice oral argument rounds,”  Walker wrote in a memo to faculty.  “It shows that this was truly a team effort — excellent student advocates, students helping with judging practice rounds, and my faculty colleagues.  It’s now on to Washington!”