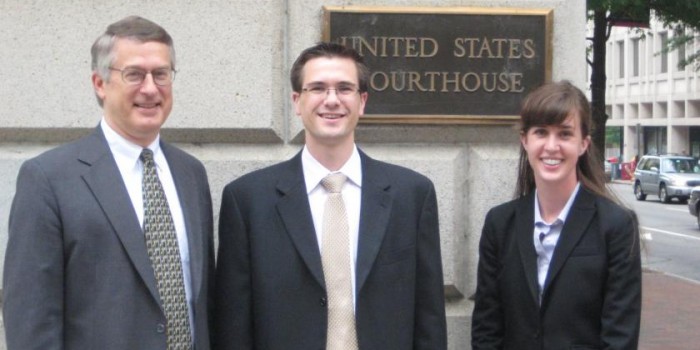 On Friday, May 13, just two days before graduation, Ben Wiles (’11) argued in the United States Court of Appeals for the Fourth Circuit, in the case of United States v. Russell Lee, as part of the Appellate Advocacy Clinic.

Professor John Korzen and Megan Curran (’11), who worked with Wiles on the appeal, also attended the argument, which was held in the Fourth Circuit courthouse in Richmond, Va.  Wiles’s wife, parents, and grandmother were also there.

In Lee, the Fourth Circuit appointed the Clinic to address the issues of whether the Court can dismiss a late-filed criminal appeal sua sponte – that is, without a motion by the government –and, if so, whether dismissal is warranted when the delay in filing is not inordinate.  Lee, while representing himself pro se, had filed his notice of appeal 50 days late.  Wiles and Curran drafted a 30-page brief on those issues and an issue involving the merits of Lee’s conviction, as well as a 23-page reply brief.

The sua sponte dismissal issue is significant in the Fourth Circuit and all federal circuit courts, as a result of a 2007 Supreme Court holding that a timely-filed notice of appeal is not a jurisdictional requirement in criminal appeals.  (Courts do reach jurisdictional defects are reached sua sponte.)  After the Clinic filed its initial brief on the issue, the government then moved to dismiss the appeal for being untimely filed, requiring Wiles and Curran to address an entirely new issue:  whether the government had waited too long to move to dismiss.

The panel that heard oral argument included Judge Diana Motz, Judge Andre Davis, and Judge Barbara Keenan.  The judges posed numerous difficult questions to Wiles, including whether they could still reach the sua sponte issue in light of the government’s recent motion to dismiss.

“Ben handled the questions and made his points very effectively,” said Professor Korzen, director of the Appellate Advocacy Clinic.  “He was calm and confident from the outset.  Judge Motz specifically commented that he made a ‘great tactical decision’ in where he chose to start his argument, and after the argument all three judges praised his argument and the Clinic’s briefs.”

“It was a great experience,” Wiles said.  “I’m happy with how the argument went.”

Wiles’s oral argument caps a busy, successful year for the Appellate Advocacy Clinic.  The Clinic handled six appeals this year, with five oral arguments, including four appeals in the Fourth Circuit and two in the North Carolina Court of Appeals.  The Clinic represents indigent clients in various appellate courts.  For more information about the Clinic, contact Professor Korzen.