School of Law confers hoods on the class of 2011 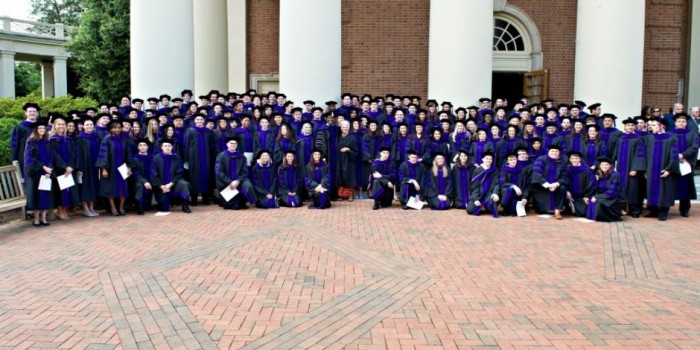 Wake Forest University School of Law conferred hoods on 183 graduates on Sunday, May 15, in Wait Chapel.

The law school’s 37th annual hooding speaker, U.S. Supreme Court Clerk William K. Suter, told the graduates and their families and friends that there’s more to life than being a lawyer and getting a good job.

“Do something that you want to do,” he said. “You should also strive to be honorable and responsible citizens. I believe all of us have skills we can use to better society.”

Graduation exercises were held on Monday, May 16, at Hearn Plaza where Suter received an honorary doctor of laws degree from Wake Forest at the graduation ceremony. “This is my seventh visit to Wake Forest and I love it here,” he said.

Suter is the 19th Clerk of the Supreme Court, a position he has held since 1991. The clerk attends all oral arguments at the Court. The clerk’s responsibilities include managing the Supreme Court‘s docket and calendar and overseeing the Supreme Court Bar. Suter is a retired major general in the United States Army. At the time of his retirement from the Army in 1990 he had served for over a year as the acting Judge Advocate General. He had previously served as the Assistant Judge Advocate General of the Army, Chief Judge of the U.S. Army Court of Military Review (now called the U.S. Army Court of Criminal Appeals), Commander of the U.S. Army Legal Services Agency, and Commandant of the Judge Advocate General’s School. During his military service, General Suter was awarded the Bronze Star for his service during the Vietnam War and the Distinguished Service Medal. Suter obtained a bachelor’s degree from Trinity University and his law degree from Tulane University. He was admitted to the bar in 1962.

Law School Dean Blake Morant described hooding as a bittersweet moment for him and shared a number of memorable moments he shared with the class.

“Everything you’ve experienced in your three years you have greeted with humor and this mixture of spirit, warmth and dedication that truly personifies your class,” he said.

He also told the graduates that he is confident that each one of the class of 2011 will continue to thrive.

“Your ability to hit the ground running irrespective of any obstacle will give you a great sense of accomplishment and will ensure your success,” he said.

Dean Morant announced that the third-year graduating class chose Professor Charley Rose as “Professor of the Year” and retiring Admissions Director Melanie Nutt as “Staff Member of the Year.”

• Cynthia Clare Byrne received the American Bankruptcy Institute Award, which is given to the most outstanding student in Debtor-Creditor Law.

• Amanda Teal Johnson received the American Bar Association and The Bureau of National Affairs Award for Excellence in the Study of Labor and Employment Law for employment law, which is given to the students who achieve the highest grade in the course.

• Mary Kathryn Leigh Rector received the American Bar Association and The Bureau of National Affairs Award for Excellence in the Study of Labor and Employment Law for 2010 employment law, which is given to the students who achieve the highest grade in the course.

• Teresa Lizeth Daley received the American Bar Association and The Bureau of National Affairs Award for Excellence in the Study of Labor and Employment Law for labor law, which is given to the students who achieve the highest grade in the course.

• Jacquelyn K. H. Willingham received the Dean’s Award, which is given to honor the extraordinary contributions of a student leader.

• Jonathan Derrick Williams received the E. McGruder Faris Memorial Award and $200 cash, which is given to the student exhibiting the highest standards of character, leadership, and scholarship.

• Jacquelyn K. H. Willingham received the Forsyth County Women Attorney’s Association Book Award, which is presented annually to an outstanding female graduate based upon her academic achievements, leadership, service to community, professionalism and commitment to the legal profession.

•  Alicia Marie Luchetti received the Laura J. Gendy Award, a new award that was established by alumni, family and friends of Laura J. Gendy (JD’ 00) to provide an annual cash award in the amount of $500 to a graduating law student who exemplifies integrity, compassion for others and strength of character that were the hallmarks of Gendy, who died in August 2008.

• Charles Eldridge Mellies and Kelly Beth Smith received the Robert Goldberg Award in Trial Advocacy, which honors the memory of Robert Goldberg, a student at the School of Law, who was killed in World War II. It is an annual cash award in the amount of $3,000 given to the students showing the highest aptitude and ethics in trial advocacy.

• Meggan Michelle Bushee received the I. Beverly Lake Award, which was established in honor of I. Beverly Lake Sr., professor of law at Wake Forest University, practicing attorney, assistant attorney general of North Carolina 1951-1955, and retired Justice of the North Carolina Supreme Court. The annual cash award in the amount of $500 is given to the student or students in the law school exhibiting the greatest proficiency in the study of Constitutional Law.

• Michael Asher Lennox received the North Carolina State Bar Student Pro Bono Service Award, which is presented annually to a student who has contributed time and talent to law-related service.

• Alanna Brittany Zuchelli received the James A. Webster Jr. Faculty Award, which is given to the student who displays the greatest proficiency in the courses of Property, Real Property Security and Donative Transfers.