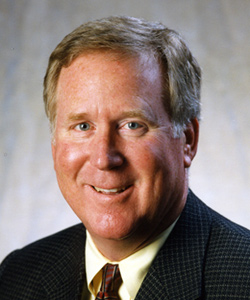 Throughout his more than 30-year career as a commercial real estate attorney, Adams has been devoted to making Winston-Salem, particularly the city’s downtown area, a better place to live and work. Adams’ work includes numerous civic projects that have strengthened Winston-Salem’s central core.

One key project that Adams has been involved with is the Piedmont Triad Research Park in Winston-Salem. The biotech center, which is still growing, is bringing thousands of high-paying jobs to the Triad region.

Adams also served as President of the Wake Forest University Alumni Association in 2003-04 and has served in several leadership positions in the United Way of Forsyth County. He is active in Centenary United Methodist Church and is a frequent blood donor to the American Red Cross.

“It is a privilege to practice law, and the perfect way to respond to the privilege is by giving back to others,” Adams said. “When one’s life is over, the ultimate compliment is that, ‘She or he made our profession and community better.’ Life is not about what I have earned in the way of income, but what I have done for others (including my family). There is no greater reward.”

Adams is the fourth Womble Carlyle attorney to be named a Citizen Lawyer by the North Carolina Bar Association. The NCBA recognized Kim Stogner in 2009 and Sen. Pete Brunstetter in 2008. Hada de Varona Haulsee was a Citizen Lawyer Award recipient in 2007.

The 2011 Citizen Lawyer Awards will be presented June 24th at the NCBA’s Annual Meeting at the Grove Park Inn Resort & Spa in Asheville, N.C.