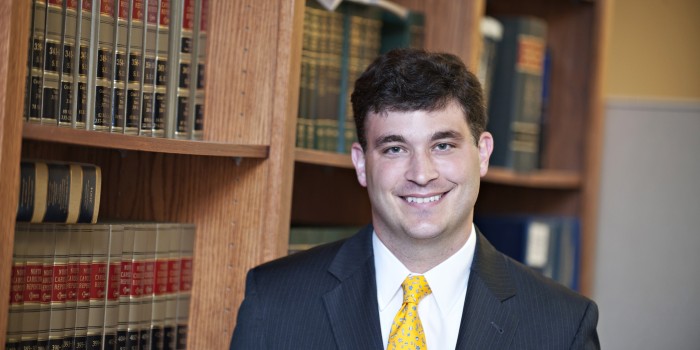 The Triad Business Journal included Wells in its 2009 “Top 40 Under 40,” a list of young area business leaders. Business North Carolina magazine cited him as one of its “Legal Elite Young Guns” (Best Under 40) for 2011, and Super Lawyers magazine has listed him as a “Rising Star” for two consecutive years, in 2010 and 2011.

“A good deal of that has to do with my success as an attorney, but I think I’ve had a lot of visibility as a result of doing things in the community and through the bar association,” says Wells, who has been particularly active with the Young Lawyers Division (YLD) of the North Carolina Bar Association (NCBA). The 33-year-old is serving a two-year term as the District 9 representative to the American Bar Association.

Most recently, the NCBA gave Wells the Younger Lawyer Pro Bono Service Award, presented annually by the Young Lawyers Division, at the annual meeting of the YLD on Saturday, June 25.

A Winston-Salem native, Wells was selected in part because of his efforts with Project Grace, a YLD initiative that provides health care power of attorneys and living wills free of charge to underprivileged North Carolinianswith an emphasis on fixed income senior citizens. Wells has also undertaken a number of leadership roles within the bar and with community organizations in the Winston-Salem area, including United Way and the Parks and Recreation Department where he serves as a commissioner. He has also been actively involved in the American Bar Association where he serves as the ABA YLD District 9 representative for 2010-12.

Since earning his law degree, he has worked at Wells, Jenkins, Lucas & Jenkins in Winston-Salem, which his father co-founded 18 years ago. He primarily handles personal injury cases, Social Security disability cases and estate planning.

Last summer, Project Grace won a national first-place award from the ABA in the “Service to the Public” category.

“We would have been pleased to even place in it, but to win the entire thing was just far beyond our expectations,” he says.

Project Grace, which Wells created with Jocelyn Fina, his co-chair on the state YLD’s Law and Aging Committee, is a free one-day legal clinic at which volunteer lawyers draft health care powers of attorney and living wills for people who cannot afford them. Clinics are held several times per year in alternating cities. At the first two clinics in Winston-Salem and Raleigh, 29 lawyers and 30 support volunteers served 130 people and drafted more than 260 documents. Those results secured the 2010 ABA award.

“Health care issues are probably the most significant issues in estate planning, because they cause people the most anguish and heartache, particularly in a living will situation,” Wells notes. “Who wants to make the decision about whether a parent should live or die? The living will, in particular, can make that decision beforehand and removes the burden from their loved ones. It’s kind of the ultimate gift that you can give your family members—the peace of mind to know that’s what a parent wanted.”

This year, Project Grace added clinics in Durham and Greenville, and Wells hopes to continue expanding coverage statewide. A key to the project’s successful launch—the first clinic was at Winston-Salem’s Downtown Health Plaza in fall 2009— was Wells’ volunteer work with the United Way, which helped publicize the event to the target population. He also serves on the Winston-Salem Recreation and Parks board, and he participated in Leadership Winston-Salem in 2010.

“I think we have an obligation to help people and to give back to the community,” he says. “I always felt like both of my parents tried to help other people and to make the world a better place. I think the thing that’s helped me most as a lawyer is the ability to relate to people and to empathize with them, and I think I learned that from my mother.”

His mother, Janet, taught reading at Walnut Cove Elementary School while his father attended Wake Forest University School of Law. She later returned to the classroom at Winston-Salem’s Sherwood Forest Elementary School for another 10 years before retiring. Wells has an older sister, who is a professor at Notre Dame University, and a younger brother, who is a lawyer in Chicago.

“I always knew I wanted to be a lawyer,” Wells says, acknowledging his father’s influence as a role model. “We’re very close. We’re very like-minded about things—our work ethic, our beliefs and morals, the way we treat other people.”

Wells’ father, who has received multiple awards himself, serves on the NCBA Board of Governors and on the boards of numerous business and nonprofit organizations.

He lectures at the law school, conducts free legal seminars in the community, and discusses legal issues on radio shows and in a monthly newspaper column.

Wells attended the University of Virginia, where he earned a bachelor’s degree in history in 2001, and met his wife, Heather, and then to Wake Forest School of Law, where he says he received a superior education.

“We were well-taught, I think,” Wells says. “I didn’t like it at the time, but the legal research and writing was probably the most useful experience. If there’s anything that has distinguished me as a young lawyer, it’s that I’ve done very well writing briefs and finding cases that help us strategically when we’re in litigation.”

The firm’s offices off Polo Road are a stone’s throw from the law school, and Wells stays connected, visiting the law library to research cases and attending events.

Guest speakers he has met include Supreme Court Justices Sandra Day O’Connor and Ruth Bader Ginsburg, and one of his favorite writers, John Grisham.

An avid reader, Wells also enjoys writing. He publishes a humorous blog at southernlawyernc.blogspot.com., where he pens fictional short stories with a legal twist. “It’s a creative outlet,” he says. “It’s enjoyable, and it’s been getting a lot of hits.”

Wells plans to submit his stories to magazines, but says his law career keeps him too busy to consider a novel. Moreover, after eight years of marriage, he and his wife are thinking about having children.

Asked what advice he offers beginning lawyers, he has a ready answer—one he gave recently when asked to speak at another firm. “If you really want to enhance your reputation, yes, you need to do a good job as a lawyer, but there is a high correlation between attorneys who are active in the bar association and other pro bono activities and those that are very highly regarded lawyers.”

Clearly, Wells himself has taken that counsel to heart.