Reaping the benefits of hard work 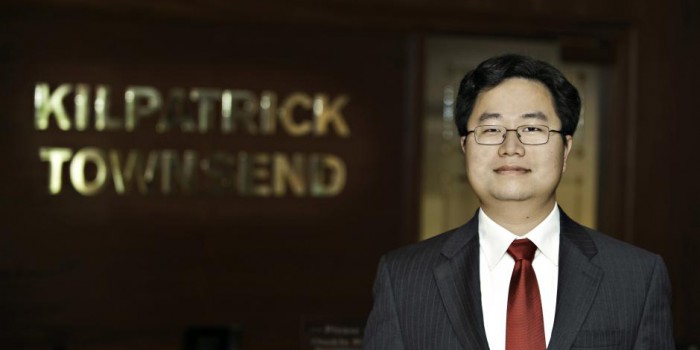 It doesn’t bother ChenFan Fu at all to admit that when he started high school in Shanghai, China, he was at the bottom of his class of some 700 students. For one thing, it was a very good high school, Fu says, and his classmates were very smart.

But a funny thing happened during his high school years. While his classmates got into basketball and video games and other distractions, Fu, with the encouragement of his parents, worked hard.

“When I graduated, I was the top student in class,’’ he says, using the story to launch into an explanation of the way he got his nickname, the name people here, including his co-workers at Kilpatrick Townsend & Stockton LLP, call him today.

In China, Fu says, it is common for students to adopt an English name while taking English classes, which the government pushes for its citizens. Fu, a movie lover, says Forrest Gump is his favorite “because he works so hard.’’ So he adopted Forrest as his English name.

Fu is the personification of hard work.

After high school, he went on to obtain a Chinese law degree from the University of International Business and Economics in Beijing – students there enter a combined college-graduate program at 18 – before coming to the U.S. to study law at Wake Forest University.

At Wake Forest, Fu became one of the first students to obtain an LLM degree who then continued on to earn a JD. Even though he already had the Chinese degree and his LLM, Wake Forest required him to take the LSAT before admitting him to the JD program.

He made the connection at Kilpatrick Townsend through a partner, the late Bob Elster, at an early outreach program for international students at Wake Forest, and Elster told others at the law firm about Fu. As a result, Fu began working as a paralegal after his LLM year of study.

Now, as a young corporate lawyer – he passed the North Carolina bar exam on his first try last summer – the preternaturally calm Fu does everything from legal research to analyzing issues involving corporate law to drafting documents that relate to forming companies.

Because of his background, Fu also is called upon for international work as Kilpatrick clients seek to do business in Asia, particularly China.

W. Randy Eaddy, a partner at Kilpatrick Townsend who is Fu’s boss, says the value of having someone work with clients who is fluent in Mandarin Chinese and a native is not to be underestimated.

“That embodies knowledge about ways of doing things, culture, and how people are likely to perceive a business situation or opportunity and thus be better able to translate that to Americans, who, with their detached and outside knowledge and study of those things, really have a limited degree of true awareness.

“When you have a resource that allows you to get what in essence can become an inside perspective … you really have something that is fantastic.’’

Eaddy is like others who have gotten to know Fu – all mention his modesty, his ambition and his work ethic.

“I guess you’re just captivated by his eagerness to learn in a most humble, respectful way,’’ says Steve Berlin (’84),  a Kilpatrick Townsend partner whose family has become close with Fu.

Alan Palmiter was the School of Law professor whose textbook first caught Fu’s attention when he was studying law in China, leading him to pursue Wake Forest as an option. He became Fu’s advisor, and wound up writing a recommendation for him.

“I believe he is capable of extraordinary things. And not because he’s a competent lawyer and he’s bilingual and is able to navigate two legal worlds, but because of this humble, charismatic calm,’’ Palmiter says.

“It’s not that Forrest figures out what the legal angles are and writes great contractual language. He figures out what people are really feeling and thinking. And that’s over time much more powerful.”

When he arrived in Winston-Salem in August 2006, Fu’s first roommate was Tom Santoro, who had sought a Chinese roommate because he wanted to keep being able to practice the language of the country where he’d lived for a time.

Santoro, now a litigator for New York-based Milbank Tweed Hadley and McCloy handling white-collar offenses, says in a telephone interview that Fu was “a nice guy.’’

“I remember he was very intent on living within his budget and his means, and he lived pretty simply and studied hard.’’

It also turned out there wasn’t that much Chinese spoken by Fu or other Chinese students. “As eager as I was to speak Chinese regularly,’’ Santoro says with a laugh, “they were eager to speak in English regularly.’’

If Fu worked hard through his years at Wake Forest and during his paralegal service at Kilpatrick Townsend, he was clearly following a path set by his parents, who he says inspired him.

His father, he says, works for a state-owned company in China that makes textile products. Originally, he says, his father worked in a storeroom moving boxes because he hadn’t gotten the chance to go to college. When his father decided he wanted to go to college after he’d been working a few years, his fellow workers told him it would be too difficult at his age. But his father did it, and he also later learned to speak English, sometimes, Fu says, just going out to public roads and speaking it loudly for practice.

“Twenty years later, now he’s manager of sales department,’’ Fu says, voice belying, ever so slightly, his pride. “A lot of people who were laughing at him 20 years ago are still in the storeroom.’’

Where Fu might be in 20 years is less clear. He says he enjoys being in the United States and learning U.S. corporate law, much of which is a foundation for the still-developing law in China.

And he enjoys what he says is the “peaceful, quiet’’ of Winston-Salem. Compared with China, people in the United States are more independent and life is more relaxed. He says he finds himself becoming more candid, a difference from the more modest attitudes of typical Chinese people.

“Once here, you have to rely on yourself,’’ Fu says.

He keeps in regular touch with his parents thanks to Skype. They came to his School of Law graduation last year, and traveled with him to several places to visit, including the beach.

He’s not sure where he’d like to live or work in the long term, but does has a vision of being successful in the roles of corporate attorney and international attorney.

“I would define success for corporate law attorney as maximizing the best interest of my clients, helping them get through (business) without getting into trouble, maximizing their success. When I can do that, I’m successful.’’

“As international attorney, my goal is to maximize success, not only by legal advice, but cultural.  The culture of doing business in a foreign country, you need to understand both countries.’’

Eaddy, Fu’s boss, says his young attorney has adapted well to life in America, even occasionally showing off a prankster side at the office. More important, Eaddy says, Fu has a skill set not often seen.

“He does project sort of a quintessential calmness and maturity well beyond his age. And I don’t know whether to attribute all or most of that to perhaps the different cultural environment within which he was raised … or if it is unique even within the Chinese culture, but it is manifest in Forrest.

“Those are good qualities for any person, in any line of business, in any culture.’’

Likewise, Palmiter offers high praise for his former advisee, after acknowledging that Fu probably wasn’t the most brilliant student to ever graduate from the School of Law.

“But to me, he’s more likely to change the world than anybody I know.”