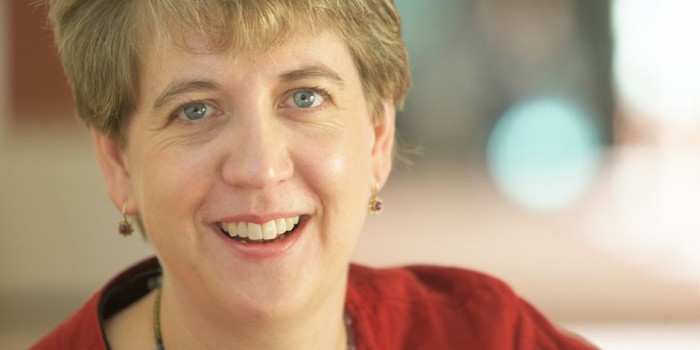 Professor Margaret Taylor grew up near the Rio Grande, which creates a natural border between the U.S. and Mexico.

From her home in El Paso, Texas, Taylor and her family watched as the debate over immigration unfolded around them. She watched the people in Texas and thought of the people who lived in Juarez, Mexico, on the other side of an often-impenetrable border.

She became captivated by their stories and the policies that divided the countries.

Taylor is a professor of torts and immigration law expert at the Wake Forest University School of Law. On March 29, 2011, Taylor spent some time speaking with law students as part of the “Conversation With” series.

“I had this sense of borders, of us and them, and of dividing lines,” she said.  “The notion of borders was a significant part of  my culture.”

Her early life helped not only to define who she would become, but also served as a guide as she ascended toward a remarkable law career. Her mother was a teacher, her father a Presbyterian minister. He gave much thought to the Sanctuary Movement, wherein churches offered safe haven to Central Americans seeking refuge status.

Taylor began to study immigration issues, and as a student at the University of Texas she visited Mexico as part of a mission trip. She helped persuade the trip organizer to detour the return route through Los Fresnos, the site of an Immigration and  Naturalization Service detention facility. She remembers the prisoners, their bright orange jumpsuits contrasted against the somber prison walls.

“That experience … really shaped a lot about what I did,” Taylor said. “I was captivated with policy before I even knew what policy was.”

An accomplished writer, Taylor earned her JD from the Yale Law School, where she was editor of the Yale Law and Policy Review.

It was during a clerkship with the Honorable Jerre S. Williams, U.S. Court of Appeals for the Fifth Circuit, that she began to contemplate a career in academia.

“Judge Williams started to plant the seeds in my mind as well. He was a gifted writer. And when you’re in an office where your job is turning out written work five days a week, and you have someone who is continually editing your work and teaching you how to make it better … that actually had a tremendous impact on me, in part because he was so skilled at it.”

She thought about life as an undergrad at Texas, which is a big school with big classes. But Yale was different. Smaller, more intimate.

“I really did genuinely feel that I didn’t have a true educational experience until I experienced it in a smaller environment,” she told the law students.

It’s that personal interaction, the close working relationship between student and instructor that define Wake Forest.

“When I was on the market thinking about teaching jobs, one of the things that was a big priority to me was to try to find an environment where there were small class sizes and a lot of emphasis on interaction between faculty and students … I had benefitted so much from it and had grown so much from that when I was a law student.

“That continual interaction with students is one of the key and best things about teaching.”

She relishes the moment when the proverbial light bulb goes off in first-year law students, that moment when they begin to understand how the cases they read mesh, allowing the students to reflect on doctrine.

“Most of my work tends to be what is happening in the real world rather than the pure theory,” she said.

Taylor helps students navigate through the functions of immigration courts, which are linked to another of her classes — administrative law. She recently has worked on legalization issues based on public service projects and other inquiries with an eye toward a congressional move to enact a legalization program. How should it be designed? How should it be administered?

“When we last enacted a legalization program in 1986, the question of design, and the question of how to administer the program were, to put it diplomatically, not very well thought out,” she said.

As a law student Taylor wrote a paper about what at that time were policies surrounding INS detention. She is now the author of numerous articles, book chapters, symposia and other presentations.

“Immigration detention was my first key topic,” she said. “Immigration law is an unusual field for legal scholars of my generation because it was so new. People had been writing about torts for well over 100 years. The first immigration law casebook came out when I was in law school.

“When I became a law professor in 1991, I actually had a luxury of defining a research agenda nobody had thought about or written law review articles about. There was very little policy attention in Congress about whose being detained by the INS, why are they being detained … It was a very open area, a wonderful opportunity for a young scholar.”