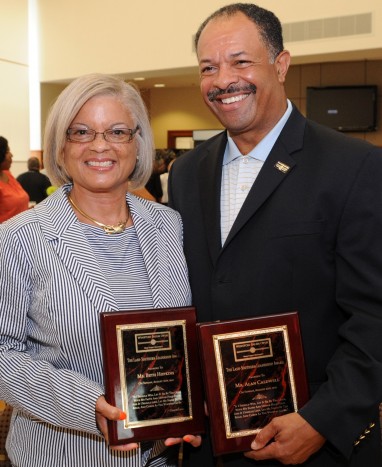 This year’s Lash Southern Awards were given to Alan Caldwell and Beth Hopkins. The Lash Southern Awards will continue to be presented annually in honor of David Lash and Mildred Southern, two sports and tennis pioneers from Winston-Salem who devoted much of their professional and personal lives to tennis and those who enjoying playing it.

Lash began his 32-year coaching career in 1941 in Caswell County and later coached a combination of tennis, basketball and football at Winston-Salem’s Carver High School, Atkins High School and East Forsyth High School. He was inducted into the North Carolina Tennis Hall of Fame in 1997.

Southern became the driving force behind tennis in Winston-Salem in the 1960s, including the creation of the Young Folks Tennis Program, widely respected as one of the leading grassroots tennis programs in America. She was inducted into the North Carolina Tennis Hall of Fame in 1982.

To qualify for the Lash Southern Award, candidates must have a strong track record of community volunteer leadership and exhibit a wide range of personal, volunteer and/or professional characteristics that are supportive of diversity and inclusion within the community. Award recipients also must have demonstrated the use of their community leadership roles to drive a love of tennis, sports and/or general community-based initiatives.

“Alan Caldwell and Beth Hopkins were clear choices as the first two recipients of the Lash Southern awards. Each of them has shown a love for tennis and sports,” Oakes said. “They equally love the Winston-Salem community and the people who live here.”

Before joining R. J. Reynolds Tobacco, Caldwell enjoyed a career in the NFL with the Los Angeles Rams and New York Giants from 1978 to 1980. He is a 1978 graduate of the University of North Carolina at Chapel Hill, where he was a two-year letterman in Track and Field and All Conference a three-year letterman in football. As co-captain, he led the UNC team to win the 1977 ACC football title.

In Winston-Salem, Hopkins and her son have conducted introductory clinics to a number of summer daycare programs. Last year, she collected tennis racquets and balls for the new team at Atkins High School. Several years ago, she collected racquets for members of the historically black Dillard University tennis team when it lost all its equipment after Hurricane Katrina.

Hopkins has tirelessly urged the national tennis officials to include African-American tennis pros in their national programs. Locally, she negotiated with the City of Winston-Salem to repair tennis courts at Winston-Salem Preparatory Academy because the courts filled with mud after each rainstorm. She also has served as a volunteer coach for the Winston-Salem Prep boy’s tennis team.

She began her professional career with a civil rights law firm and later served as a federal prosecutor in Richmond, Va., and in Shreveport, La. Currently, she teaches at the Wake Forest University School of Law and directs its pro bono program, which is a program for law students to offer free legal help to the community. Hopkins also is helping to develop a project to assist homeless Veterans in Winston-Salem and last year spearheaded a similar project to help the Lumbee Indians in Pembroke, N.C.

For more information or the Winston-Salem Open, please go to www.winstonsalemopen.com.