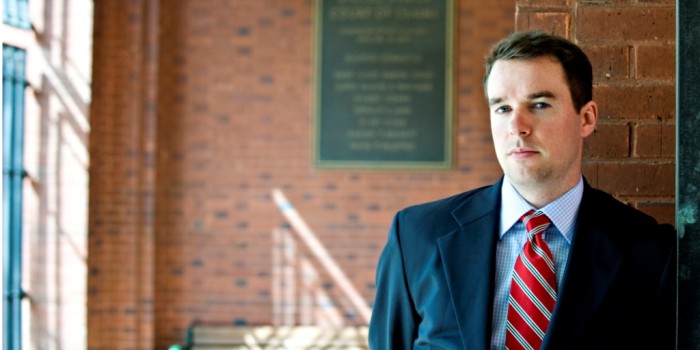 Tucker McCarthy (’11)  prefers to hang on the periphery of what others deem normal. To him, the word comfort is meaningless in terms of his outlook on life.

Heck, he’s from Buffalo, N.Y., one of the least comfortable places in the U.S come winter. He earned in bachelor’s degree from Colgate University in Hamilton, N.Y., before coming to Wake Forest to earn his law degree, for which he spent time studying in Europe.

He plans to earn an LLM in Banking and Financial Regulation from the London School of Economics. He wants an iPad2.

McCarthy’s life and accomplishments so far cannot be defined by the conventional definition of normal. Comfortable and easy? Far from it. Well, not unless one considers the part about the iPad2.

McCarthy while at Wake Forest took part in the Washington D.C. Metropolitan Externship Program; he was placed at the Office of the Special Masters.

The Wake Forest School of Law Program in Washington provides students with the opportunity to spend a semester in practice in the most diverse and vibrant legal environment in the world. The program includes both an externship component and a programmatic initiative that includes conferences, roundtables, symposia, and lectures.

“I have always sought unconventional experiences and educational opportunities,” McCarthy says. “The summer after my first year I studied in London and Vienna. Those experiences validated my belief that putting oneself outside one’s comfort zone stimulates the greatest personal and professional growth. In the Metropolitan Externship Program, I saw another opportunity to broaden my education.”

And to have some fun, as well. In Washington he saw the Nationals play, attended a couple of concerts, frequented the National Portrait Gallery and met teen singing sensation Justin Bieber.

“The highlight of my externship was getting to know all of the motivated and intelligent people who are the Office of the Special Masters,” McCarthy says. “I now count them as friends and mentors who I will remain in contact with for the rest of my professional or personal life—whichever ends later.”

The externship program, he says, also opens another door to an extensive network of professionals with a love for Wake Forest. McCarthy found value in the externship program for myriad reasons, including that it allowed him the opportunity to see how a court operates and to take part in the weighing of arguments and the formulation of decisions.

The Office of the Special Masters, he says, is a branch of the U.S. Court of Federal Claims and is essentially the trial court for all vaccine-related injury claims against manufacturers.

And while one can surmise a judge’s leanings by studying his or her jurisprudence, reviewing cases is an inadequate substitution for working in a judge’s chambers.”

As part of his duties at the Office of the Special Masters, McCarthy was assigned to cases on the court’s autism docket.

“Days before I began work, a respected medical journal published an article attacking the integrity of Dr. Andrew Wakefield and his 1998 paper alleging a causative relationship between vaccines and autism.”

According to CNN.com, “The British medical journal BMJ, which published the results of its investigation, concluded (Wakefield) misrepresented or altered the medical histories of all 12 of the patients whose cases formed the basis of the 1998 study — and that there was ‘no doubt’ Wakefield was responsible.”

The doctor has told CNN he was the target of “a ruthless, pragmatic attempt to crush any attempt to investigate valid vaccine safety concerns.

“Although the discrediting of Dr. Wakefield and his study received a lot of media attention,” McCarthy says, “I soon learned that the court had been ruling against petitioners in autism and autism spectrum cases long before the media ran with the story. Working at the center of a highly publicized issue was exciting. Better yet, I felt like I was in on a secret that was still being debated in the public forum.”

During the first semester of his third year, McCarthy worked in the legal department at R.J. Reynolds. Observing the role of in-house attorneys in a heavily regulated and litigated industry, he says, “was a once-in-a-lifetime opportunity.”

But … “As a part-time intern I did not have the opportunity to forge the lasting relationships with co-workers that a full-time externship
offers. Earning the trust of one’s superiors is essential for a fruitful internship experience. A full-time externship spanning four months provides sufficient time to earn the trust necessary to be given more interesting projects.

“I would recommend the externship program to others because there is no better place to observe the possibilities of a legal education than Washington. Through the externship program, students have the opportunity to meet lawyers who work in legislation, litigation, lobbying and other legal areas that offer young lawyers the chance to do important work.”