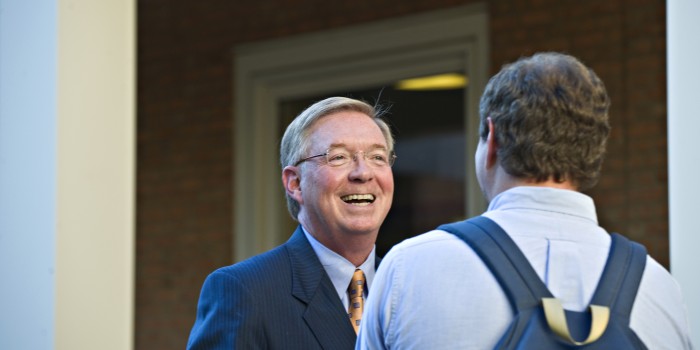 The new healthcare reform law provides broader access to health insurance, but it does very little to reduce costs. That must change if Americans are going to get the healthcare they deserve, said Brad Wilson (’78), the president and CEO of Blue Cross Blue Shield of North Carolina.

Wilson spoke to faculty and students on Tuesday, Oct. 25, as part of the  Healthcare Speaker Series. His talk on “Driving Value in Our Health Care System” was sponsored by the Wake Forest School of Law and the Schools of Business MBA Healthcare Club.

“We pay more than any other nation,” Wilson said, “and we’re getting less in return.”

The United States ranks 36th on world tables of life expectancy, he said.

The country leads World Health Organization statistics in diabetes, mainly because of our unhealthy life styles.

Change is coming, no matter what happens with the new healthcare law. Patients are demanding more transparency about costs and the quality of the doctors and facilities that they use, Wilson said.

New business models for delivering healthcare more efficiently will emerge and there will be more of an emphasis on primary care physicians and preventive care.

“You’re going to have to become a more educated consumer,” he told the audience.

He urged students to get involved through internships with his company or to take advantage of other opportunities in healthcare. The field is open to new ideas and perspectives, some of which are already underway.

Wilson said that he is excited about his company’s partnership with UNC Health Care, the state’s health care system, to develop Carolina Advanced Health. The new medical practice which will open in December in the Quadrangle Office Park in Chapel Hill.

The practice will care for about 5,000 Blue Cross Blue Shield members with a focus on patients with chronic conditions. The clinic will emphasize patient involvement, support and education in order to reduce costs and deliver more effective care, Wilson said.

Much of the attention paid to the healthcare reform law centers on the cost of insurance premiums, but that is only a part of the cost of healthcare, Wilson said.

Our state-of-the-art technology is wonderful, but it comes with a cost, he said.

Many redundancies and inefficiencies have crept into the system over time, he said. One medical test can turn into three tests. Patients are often required to fill out paperwork that gives the same information over and over.

He hopes that the Supreme Court will uphold the law’s requirement that everyone must buy health insurance, Wilson said. But for now, the penalties for not buying insurance are less than the cost of insurance and that will encourage some people to skirt the law.

Despite the challenges and debates, Wilson said that it is a wonderful time to be involved in healthcare. “The sense I want to give you today is that we are living in a revolutionary time,” he said, “where innovation is the watchword.”