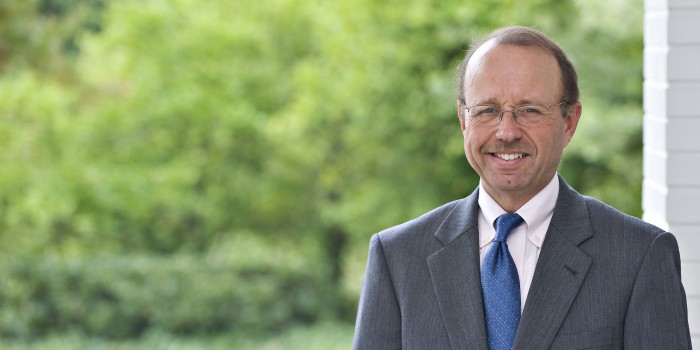 When Charlie Trefzger (‘84) was a teenager, his maternal grandmother gave him a portrait of a starchy Victorian gentleman she had found in the attic and said, “This is the last lawyer in the family, and you are the next.”His grandmother gave him the mandate to become a lawyer, but Trefzger said it was Wake Forest University School of Law that gave him the education to not only pass the bar, but to pursue his many passions in life.

“Once you enter Wake Forest, it becomes part of your life forever,” he said. “It taught me discipline. It taught me to sit and focus and work through a challenge and come up with a creative solution.”

Trefzger, who is the founder and chief executive officer of Meridian Senior Living, has given generously to the Wake Forest Fund for the School of Law. His gifts have been unrestricted, but he has a special interest in career services.

“I try to help kids understand that when you go to law school, it doesn’t mean you have to practice law,” he said. “Law is a vocational skill. It prepares you to think critically, constructively, dynamically every day, like you have to do in the real world.”

In fact, Trefzger thinks so highly of the law school that he sent his daughter Eleanor (‘10) there. His son, Henderson, will graduate from Wake Forest University with a bachelor’s degree this spring.

“I think the direction of the school is spot on,” he said. “We’ve got a great faculty and a great set of deans and we’re poised for outstanding results.”

Former professors describe Trefzger as a creative person who pursued his own course in law school, and in life.

“Charlie has always been willing to think for himself, and to think outside the box,” said Professor Ralph Peeples. “He is a natural when it comes to dealing with people.”

Professor Butch Covington, a close friend, mentor and godfather to Trefgzer’s oldest son,  said that while in law school,  Trefzger and a classmate, Kevin Black, formed a home improvement company and built Covington a deck.

“Being part of the mainstream didn’t matter to Charlie. He had his interests and he pursued them,” he said.

Covington said that Trefgzer has developed condominiums in Asheville and once bought a golf course in Hickory–activities far outside the range of most lawyers.

“He’s a happy risk taker,” Covington said. “He just looks at something and says, ‘Hey, let’s go for it.’”

Trefgzer earned a bachelor’s degree in business administration from Virginia Commonwealth University. He began his career as a tax attorney at Ernst & Whinney in Winston-Salem, but changes to the tax code in 1986 made the field less appealing to him.

He went on to work as general counsel for the Brian Center Management Corp., which owns and operates senior housing.

As he watched his grandmother’s health decline, Trefgzer realized that developing senior living and nursing facilities was a growth opportunity and a chance to contribute to the common good.

“We try to take care of people who can’t take care of themselves with dignity and passion, on a tight budget,” he said.

The field is challenging but his Wake Forest professors left him well-prepared.

“They taught me to take what I knew and apply the rules to make things work in real life situations.”