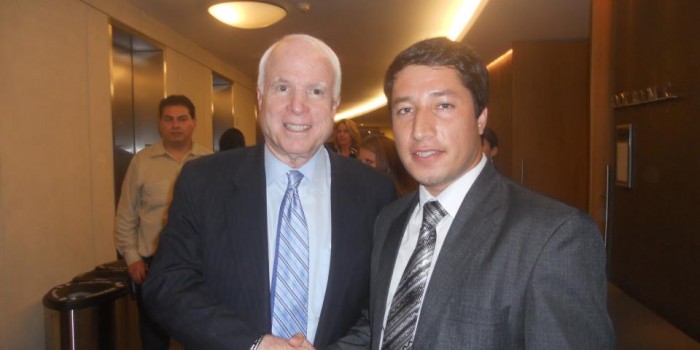 Every spring semester, Wake Forest University School of Law LL.M. students have the opportunity to hear oral arguments at the U.S. Supreme Court in Washington, D.C.  This year, Professor Shannon Gilreath led the students to visit the high court on Wednesday, April 18.

While in Washington, D.C., the law school’s Afghan LL.M. candidate, Yama Keshawerz, was invited to attend a speech given by Sen. John McCain (R-Ariz.) about Afghanistan at the Carnegie Endowment for International Peace.  “It was a great event and the event was attended by many,” Keshawerz said.

Keshawerz goes on to describe the event and McCain’s speech: “In his speech, Senator McCain wrapped up very important issues faced in Afghanistan. For instance, Senator McCain talked about the peace talks with the Taliban and disagreed with the way the peace talks with the Taliban are going on. He also criticized the planned withdrawal of the U.S. troops from Afghanistan saying it has sent a wrong signal to the insurgents and the countries in the region. In the meantime, he emphasized the U.S.-Afghan strategic partnership saying such an agreement could change the entire narrative in Afghanistan and the region from one of looming international abandonment to enduring international commitment.”

Keshawerz is the law school’s first Afghan student. Keshawerz came to Wake Forest as a scholar from the Public-Private Partnership for Justice Reform in Afghanistan (PPP).  Keshawerz led a discussion in the fall semester titled “Afghanistan after 9/11,” as part of WFU Law’s LL.M. “Lunch and Learn” series, and continues to be an active student in the law school community.

The law school is looking forward to host another Afghan PPP scholar for the upcoming 2012-2013 school year. In 2011, WFU Law was certified as a host institution for the PPP, established by the U.S. Department of State and leading private attorneys in the U.S. The PPP is a prestigious academic foundation supported by Secretary of State Hillary Clinton and former Secretary of State Condoleezza Rice and offers scholarships, training, and other educational resources to Afghan prosecutors, judges, defense lawyers, advocates, and educators.