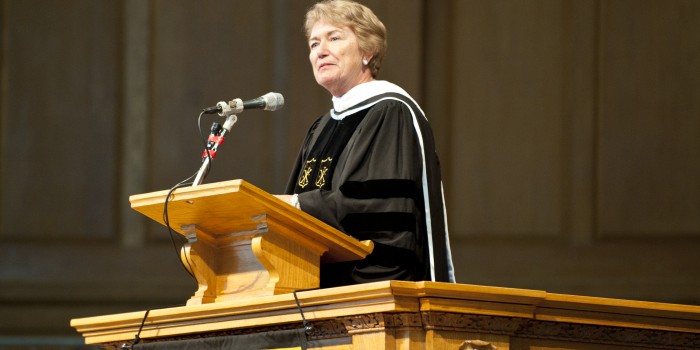 The Wake Forest University School of Law conferred hoods on 165 graduates on Sunday, May 20, in Wait Chapel.

The law school’s 38th annual hooding speaker, Senior Justice of the Virginia Supreme Court Elizabeth Bermingham Lacy, told the graduates and their families and friends “that a lawyer’s integrity is something you need to protect for your own sake as well as others in our profession.”

Lacy added, “This profession of ours is one filled with boundless ways of using this degree. You are well prepared. Now it’s up to you to open the many doors that law degrees will.”

Commencement exercises will be held Monday, May 21, at Hearn Plaza.

Law School Dean Blake Morant described this year’s class as heroes. “You are already my heroes ladies and gentlemen of the class of 2012 and will soon be heroes for this profession. I applaud you. I congratulate you. And I implore you to do well and to do good.”

The dean also told the graduates to remember their law degree is an investment for a lifetime and that the Wake Forest law school is always with them. “Your relationship with Wake Forest will travel with you no matter where you go and you will always be a very big part of the Wake Forest brand,” he said. “You will continue to thrive; I have no doubt of that.”

Dean Morant announced that the third-year graduating class chose Charley Rose as “Professor of the Year” and Ann Robertson as “Staff Member of the Year.” Professor Miki Felsenburg, who is retiring, conferred the hoods.

• Kaitlyn Ann Girard of Virginia Beach, Va., received the American Bankruptcy Institute Award, which is given to the most outstanding student in Debtor-Creditor Law.

• Kimberly Allen Richards (2012) of Granite Falls, N.C., and Aaron Charles Garnett (2011) of Washington, Maine,  received the American Bar Association’s Section of Intellectual Property Law and The Bureau of National Affairs, Inc. award a certificate and a selected ABA/BNA treatise to the student who achieves the highest grade among the courses of Intellectual Property, Copyright and Trademarks.

• Zoe Elizabeth Niesel of Friendswood, Texas, received the American Bar Association and The Bureau of National Affairs Award for Excellence in the Study of Labor and Employment Law for employment law, which is given to the students who achieve the highest grade in the course.

• Catherine Lindsey Chapple of Santa Barbara, Calif., received the American Bar Association and The Bureau of National Affairs Award for Excellence in the Study of Labor and Employment Law for 2010 employment law, which is given to the students who achieve the highest grade in the course.

• Craig Matthew Principe of Pleasantville, N.Y., and Matthew Derrick McClellan of Fork, S.C., received the Dean’s Award, which is given to honor the extraordinary contributions of a student leader.

• Matthew John Antonelli of Arnold, Md.,  received the E. McGruder Faris Memorial Award and $200 cash, which is given to the student exhibiting the highest standards of character, leadership, and scholarship.

• Sarah J. Hayward of Hampden, Maine, received the Forsyth County Women Attorney’s Association Book Award, which is presented annually to an outstanding female graduate based upon her academic achievements, leadership, service to community, professionalism and commitment to the legal profession.

•  Kelly Leanne Amell of Goose Creek, S.C., received the Laura J. Gendy Award, a new award that was established by alumni, family and friends of Laura J. Gendy (JD’ 00) to provide an annual cash award in the amount of $500 to a graduating law student who exemplifies integrity, compassion for others and strength of character that were the hallmarks of Gendy, who died in August 2008.

• Sarah J. Hayward and Katherine A. King of Elon, N.C., received the Robert Goldberg Award in Trial Advocacy, which honors the memory of Robert Goldberg, a student at the School of Law, who was killed in World War II. It is an annual cash award in the amount of $3,000 given to the students showing the highest aptitude and ethics in trial advocacy.

• Zoe Elizabeth Niesel received the I. Beverly Lake Award, which was established in honor of I. Beverly Lake Sr., professor of law at Wake Forest University, practicing attorney, assistant attorney general of North Carolina 1951-1955, and retired Justice of the North Carolina Supreme Court. The annual cash award in the amount of $500 is given to the student or students in the law school exhibiting the greatest proficiency in the study of Constitutional Law.

• Kaitlyn Ann Girard received the North Carolina State Bar Student Pro Bono Service Award, which is presented annually to a student who has contributed time and talent to law-related service.

• Miles Stuart Bruder of Lafayette, La., received the James A. Webster Jr. Faculty Award, which is given to the student who displays the greatest proficiency in the courses of Property, Real Property Security and Donative Transfers.