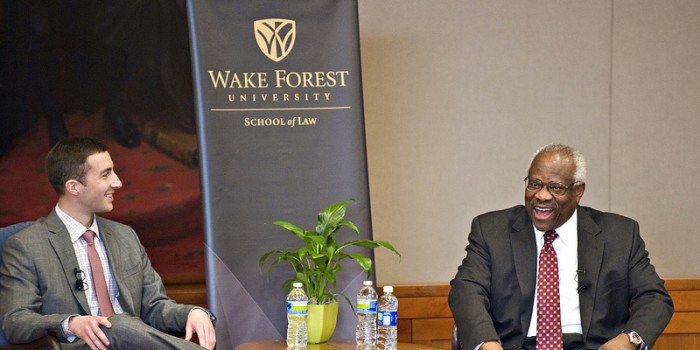 U.S. Supreme Court Justice Clarence Thomas says he enjoys visiting law schools around the country and talking with students because they raise very human questions. Conversely, his visit to the Wake Forest University School of  Law made the associate justice more human to students.

“I like hanging out with students because, believe it or not, I invariably go back thinking about something I hadn’t thought about in a certain way,” he told an audience of more than 350 people during his March 6 “Conversation With …” in which he was interviewed by Marc Rigsby (’12).

“Since I have been here, for example, there are things that I am thinking about that students raised this morning that get you thinking about something else. They are not esoteric things, they are just very human questions, and very important parts of the calculus of a decision-making process.”

Originally from Savannah, Ga., Thomas seemed more than at home among the captivated students.

“I would stay for two hours, if I could, but I would be the only one in the room!” Thomas pronounced, drawing a chuckle from the crowd.

The notion that Thomas gained valuable insight from his interaction with the law students was just one of the many ways the Justice’s authenticity, humility and humanity came strikingly across, according to the thrilled students who had the chance to interact with him.

“He made himself seem really human,” said to Rachel White (’12). “In class, we just read cases and hear the justices’ positions about an issue. We don’t really see them as a person. He was really inspiring…such a jovial, humble person to hear talk.”

Indeed, Thomas referenced his modest beginnings in Savannah, where he was born in 1948.

“Think about it: What the heck did I have to look forward to?” Thomas asked, peering at his rapt audience thoughtfully. “I was wandering the tenements of Savannah, raw sewage, unpaved roads, and then you have segregation in full swing. What did I have to look forward to? I ask you to be encouraged. You don’t know the future, and I didn’t know the future. I have no idea how I wound up on the Supreme Court of the United States. One day, I was running around in Georgia barefooted, and the next day, I was on the Supreme Court!”

Thomas’s ability to relate to students by sharing the story of his success was certainly a highlight of the talk, especially when he touched upon his experience right after graduation.

“The job market now is the same job market when I was getting out of school. I had student loans, a kid, and no job. And I became obsessed with it, and thought it was the end of the world.”

But it was Thomas’s insistence that perseverance and positivity can bring anyone through adversity that truly hit home for students.

“What I took away from today was being positive, and letting that optimism seep in to our lives from older generations,” said Anthony Keys (’14). “I think that it is really hard to do that. It’s always easier to be negative about things, to be mopey or what not. It’s really hard to stay positive when you have people in the background saying you can’t do this, or you can’t do that.”

Thomas’s influence on the students who had the opportunity to interact with him was palpable. Compounding the effect, of course, was Thomas’s clear enthusiasm for forming a connection with the next generation of law professionals.

“Each time I come out to a law school, each time I meet with students, it encourages me, too. It encourages me to go back and do the job in a way that keeps in mind that this is your country. It is your Constitution, and it is your future.”