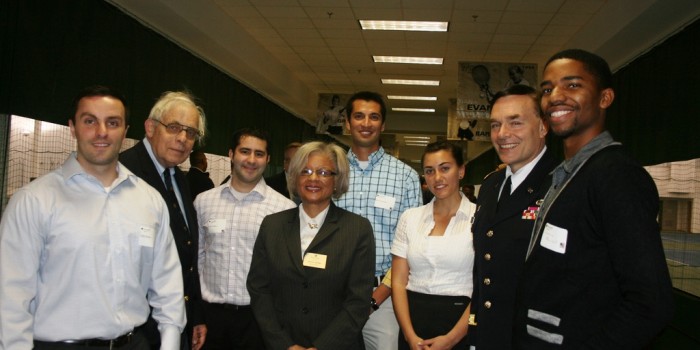 “The ABA Law Student Division appreciates the contributions of your students and school to improve the legal profession.”

According to the ABA website, the Law Student Division Public Interest Award serves as a testament to Professor Judy M. Weightman of the William S. Richardson School of Law at the University of Hawaii who, before losing her battle with breast cancer in 1998, demonstrated her passion for justice and tirelessly advocated on behalf of minorities and the poor. This award recognizes law students and law schools who have made outstanding contributions to underrepresented groups or public interest causes outside the law school and/or in public service at the law school.

Dean Morant responded, “Receiving the 2012 Judy M. Weightman Memorial Public Interest Award constitutes a significant achievement, of which we are all very proud. You should know that Professor Beth Hopkins, director of Outreach and Diversity, works very hard to ensure the quality of our programming. Much of the credit for this award goes to her and, of course, the wonderful students who volunteer their time to this effort.”

Kathryn Hatcher (’13) gathered the materials and was instrumental in VALOR being recognized in part for a free legal clinic it sponsored for 30 area veterans on Feb. 3. With attorney oversight, student volunteers provided workshops for wills and powers of attorney, rights upon police encounters, and landlord/tenant issues.  Veterans also received information from the United Way regarding housing for the homeless, from the N.C. and U.S. Departments of Veterans Affairs regarding State and Federal benefits, and from a National Service Officer regarding V.A. benefits claims and appeals.

After lunch that was donated by a local veteran, Army Major Gen. Gill Beck recognized two local wounded warriors and all the veterans were invited to watch a tennis match between Wake Forest and Virginia Commonwealth.

VALOR President Mike Miranda (’13) said: “I think I speak for everyone when I say that while it is wonderful to receive public recognition for VALOR’s efforts, what is even nicer is to see that people are taking notice of some of the issues we hope to continue addressing.  After the veterans clinic in February, an older gentleman who served in Vietnam stopped me to tell me how much he appreciated the work that everyone had put in. He said that was the the first time that anyone other than his family had told him ‘thank you’ for his service and that he had no idea so many people cared.  For most of us, that was all the confirmation we needed to know that we were doing something worthwhile.”

Professor Hopkins added that the award is well deserved.

“When I proposed the idea to the group, there was no hesitation whatsoever,” she said. “The motto of the members of VALOR is to do what they can for as long as they can for our country’s veterans.  It is my privilege to work with such a dedicated and committed group of law students. They are and will continue to be outstanding legal servants of the community.”

VALOR had tremendous support from the members of the Bar and the constituent agencies which address the needs of veterans, Hopkins added. “Everyone pitched in,” she said. “This was totally a collaborative effort. We have some exciting projects planned for the fall so we are not finished.”

Former President Andrew Kisz (’12) said it is an honor to be part of an organization that has been selected for this prestigious award.

“The members of VALOR take great pride in being able to advocate on behalf of veterans in the community and promote veterans’ issues among the students, faculty and staff of Wake Forest School of Law,” he added. “This award would not have been possible without the tremendous support from the law school  faculty, staff, and students, including Dean Morant, Dean Gibbs, Professor Beth Hopkins, Lisa Snedeker, Lawren Thach, and many more individuals that helped VALOR accomplish its ambitious goals. These individuals immediately embraced the organization and provided VALOR with the full backing and resources of Wake Forest School of Law. “