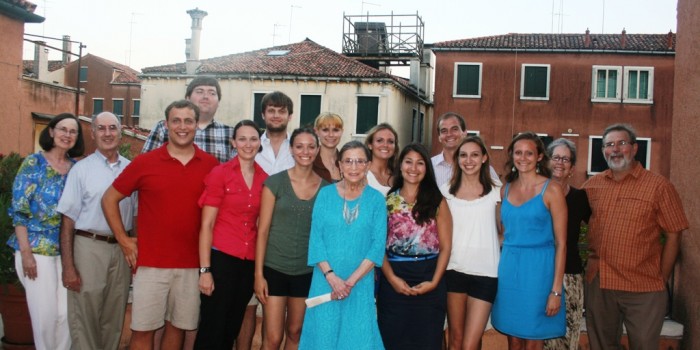 But for many of the students who attended the 2012 summer program, the highlight of the program did not lie in the canals of Venice or along the straßen of Vienna, but in their daily interaction with Associate Supreme Court Justice Ruth Bader Ginsburg.

For Kelly McNeer, a rising 2L at Marquette University who came to the study abroad program in Venice,  meeting Ginsburg was a once-in-a-lifetime opportunity.

“Most people have superheroes that they idolize. The Supreme Court justices – they’re my superheroes,” she said. “To get to see Ginsburg, to hear her speak was amazing. She was so wise and had so much advice to offer.”

During the week of July 9, Ginsburg visited the law school’s Venice program, where she gave a public lecture, served as a guest lecturer in several classes, ate dinner with students and took in the sights with Dean Blake Morant and his wife, Paulette, and Professors Joel Newman and Ralph Peeples and their wives, Jane and Faith.

Then Ginsburg hopped a plane to the law school’s Vienna program, where she repeated her agenda for the students and faculty, International Programs Dean Richard Schneider and Professor Tanya Marsh, there.

Ginsburg’s association with the law school dates back to annual alumni trips to the swearing in ceremony at the U.S. Supreme Court. That led to Ginsburg’s first campus visit in 2005 when she was part of the School of Law’s “A Conversation With . . .” series. During that visit, Executive Academic Dean Suzanne Reynolds interviewed Ginsburg about her career. Ginsburg is known for her early advocacy of women’s rights.

In the summer of 2008, Ginsburg and her late husband, Marty Ginsburg, a law professor at Georgetown University, served as guest lecturers in the law school’s Venice program. At the time, that was also viewed as a once-in-a-lifetime opportunity for those who were there.

But as Ginsburg reminded Dean Blake Morant on her most recent trip, she knew then she wanted to return.

“I could have gone to many places in the world for the summer,” Ginsburg said, “but I had such great memories of the last time I was here with you in 2008 and I think I proposed to you that I’d come back.”

Whether in London, Vienna or Venice, law students are able to see the American legal system clearer, for seeing it against the backdrop of centuries of European legal traditions. Just as important as the knowledge students gain in study abroad courses, is the chance to see the humanity beneath the black robes of a Supreme Court Justice.

“More and more we are becoming a global community, which is one of the reasons why we really encourage our students to take advantage of these programs,” explained Dean Blake D. Morant, while in Venice. “The world is more global now, even if you practice law in a small town, it can have an international dimension. The other thing I hear from partners at firms and alumni is that they want students who are going to be those who seek out different experiences.”

From telling students about the potato chip and champagne socials with the media that follow the appointment of a new justice to the circus of protests, press conferences and prayer circles that preceded arguments on the Affordable Healthcare Act, Ginsburg showed herself to a be a keen observer of the humanity that surrounds her in Washington D.C., as well as the larger world.

Some of the U.S. students who had attended a session of criminal court in Venice noticed that there seemed to be little or no plea bargaining in Italy. They wondered how Ginsburg felt about that.

Ginsburg said that the volume of cases in the U.S. makes plea bargaining a necessity. “It’s inevitable. Our trial courts couldn’t operate if all of the cases had to be tried,” she said. “So, whether you like it or not, plea bargaining is here to stay.”

For Ginsburg, the question also provided a teachable moment about the differences between judicial careers in the United States and Continental Europe.

Judicial careers in Italy begin early and potential judges climb the career ladder quickly, resulting in more judges being available to hear cases.  Judges in the United States tend to be appointed when they’re closer to 50 years old.

“Our model comes from the U.K., from the British model of choosing the judges from among the most skilled barristers,” she said.

Ginsburg is acutely aware, and sometimes troubled by, public perceptions of the Supreme Court, she told students. She struck at the popular media’s portrayal of the court as sharply divided along political lines as an example. During the past term, Ginsburg said that the court split five to four in just 15 of its 65 opinions. That comes out to a 23 percent sharp disagreement rate. In 25 of the 65 opinions, the court was unanimous in its bottom line judgment.

“Despite the impression you might get from the press,” she said, “we agree much more often than we sharply disagree.”

Such labels as liberal and conservative can be deceiving when you look at the court, she said. “Some people think, if you were appointed by a Democratic president then you’re liberal,” she said, “and a Republican president, you’re conservative.”

During most of her years on the court, the most “liberal” justice was John Paul Stevens. He was appointed by President Gerald Ford.

“I think it’s good that the press should gain an accurate understanding,” she said. Reporters have a press room at the court where they can work and when a new justice is appointed, reporters throw a champagne and potato chip party, which the other justices are invited to attend. Ginsburg said at the end of the term, she generally honors some reporters’ requests to talk with her about the term.

Ginsburg said that one of the strengths she saw in Venice was the way the Italian and American students learned from each other.

“They not only learn with, but live with, Italian students,” she said. “So, I think expanding their horizons beyond the local community, beyond the United States . . . more and more we are going to be a global community.”

Leopoldo DeMaria, a law student at University of Padua, said he loves the American approach to teaching law compared to the Italian approach, which is much more formal. “The American professors are like mates and they are students at the same time,” he said. ”I love the conversations we share during class. We are from different countries and different worlds but we find similarities in different situations and that is amazing.”

For Leslie Evans (’14), taking Professor Newman’s Comparative Tax class in Venice with Italian students was a chance to understand how other countries fund their governments. Such experiences ultimately will help connect her to people whose work and travel takes them beyond the confines of their firm or city in which they practice.

“On upcoming interviews, or when I have a job in a firm, I’ll have more of a world knowledge where I can use that experience from studying abroad,” she said, “and apply it to my legal career.”

No time spent with a Supreme Court justice would be complete without gaining a little inside information that might be useful to students when they think about arguing a case before the court. Ginsburg said that they are sometimes disappointed to learn that their briefs are not the first thing justices look at.

“They think we pick their brilliant briefs first. We don’t. We read the opinions of the trial court and the court of appeals and then we turn to the lawyers brief,” she said. “We like to use the time to put to counsel the questions on which the case may turn.”

When a student asked Ginsburg if oral arguments are important, Ginsburg said that she hoped she hadn’t given that impression. Oral arguments seldom determine the case, according to the judge.

“It may lead us to decide the case on a different ground,” she said. “It may reveal a procedural impediment, but most of the time, people leave the oral argument just where they were when they came in.”

Greta Maier, a law student at the University of Vienna, chose the Wake Forest program because of the chance to meet American students, practice her English and enrich her understanding of the two very different legal systems.

“It’s really great being able to talk to them and discuss these things in such an easy way – not to really have to worry  about, ‘I hope I’m not stepping on anyone’s toes or offending anybody.’ We’re just really having good, grown-up conversations.”