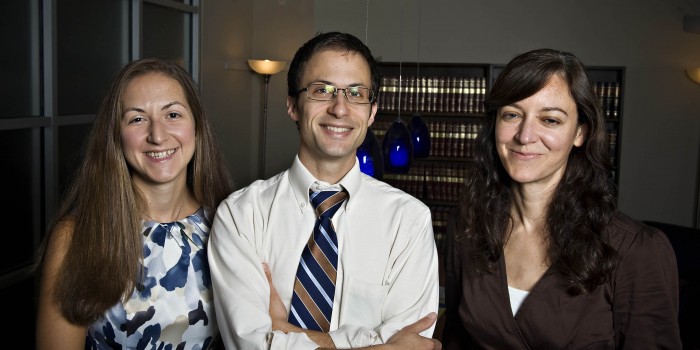 Four years of a bad economy show in their clients’ teary phone calls, desperate text messages and the weight they carry on their shoulders.

But for the three recent graduates of the Wake Forest University School of Law who staff the Piedmont Law Center, there is a comfort in working with people who might not be able to access legal services without their help.

“You’re scared, you don’t understand the system. You’re afraid people are taking advantage of you,” said Susan Sullivan (’11), of her clients. “We step in and tell people what they can do.”

Sullivan, along with Earnest Bailey (’11) and Nora Ryan (’11) staff the Center, which provides recent graduates with a chance to develop their skills. The Center offers legal services at a reduced rate to low and moderate income families. Many of the Center’s cases deal with child custody, landlord tenant relations and employment matters.

The center has two goals, said Professor Steve Virgil, a law professor and director of the Community Law and Business Clinic.

“We have graduates in a job market that’s one of the most challenging in a couple of generations,” he said. “And you have people who have lost a lot of income over the last four years who can’t afford to hire an attorney, but still have legal needs.”

Work at the center gives recent graduates a chance to take a more entrepreneurial approach to their careers, Virgil said. It’s nearly impossible for young lawyers to start their own firm after graduation. It takes time to build up contacts and to get their names out in the public.

“As a recent graduate, the worst thing you can do is to stop your professional development,” he said, “to sit at home for a year looking for the perfect job.”

Since then, 10 School of Law graduates have worked at the Center. Two of the 10 graduates have formed a firm, McCormick & Smith LLP, which shares offices with the Piedmont Law Center, which is located at  301 Brookstown, near Old Salem.

Graduates at the Center have access to the lawyers at McCormick & Smith, as well as their professors, if they need advice. Virgil said that he hopes over time that the Center will become a self-sustaining entity.

For Bailey, working at the Center is a chance to work toward his long-term career goal: “I want to be a rabble rouser.”

A traditional law practice, with its emphasis on case law and lengthy appeals, often doesn’t serve low income clients well because it often doesn’t cover clients’ circumstances. For example, couples who break up after living together and having children often have to find their own way through the legal system, Bailey said. Their financial resources, and patience, can wear out quickly.

By giving people a voice through the legal system, family tensions can often be defused and the children involved can achieve happier outcomes.

“The law is a medium through which messy reality can be navigated,” Bailey said.

Many of the Center’s cases are solved through mediation. Some go on to the court.

For recent graduates who are willing to work outside of the traditional legal framework and approach cases creatively, work at the Center offers rich rewards.

“Clients will say, ‘You’ve made me feel so much better in this terrible situation,’” Sullivan said.