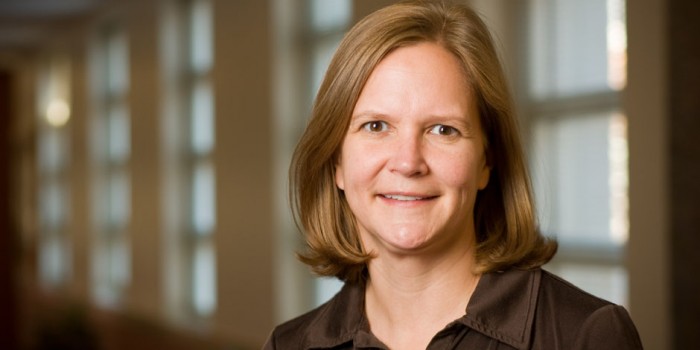 Wendy Parker is nationally recognized for her innovative scholarship in the area of civil rights, focusing on school desegregation and remedies for racial and ethnic discrimination.

A U.S. Supreme Court case that could change the way universities consider race in the admission process will be the focus of a talk by Wake Forest Law Professor Wendy Parker at noon on Monday, Sept. 17, in Room 1312 of the Worrell Professional Center.

Parker’s lecture, “Rethinking Race in University Admissions,” is part of Wake Forest’s recognition of Constitution Day. Parker is the James A. Webster Professor of Public Law and a nationally recognized expert on civil rights. She will be introduced by Provost Rogan Kersh.

The talk, which is being co-sponsored by the law school’s American Constitution Society student organization, is free and open to the public.

Parker will be discussing Fisher v. University of Texas at Austin, the latest case to reach the Supreme Court that targets how universities grant access to minority students and what that means for white applicants.

It has been nine years since the court allowed the University of Michigan Law School to use race as a consideration in admissions. Parker said the reason the court may be reconsidering the issue now is to change the outcome.

Parker said that whether that happens – or exactly how far the court will go in its decision – is difficult to predict. The Supreme Court will have a one-hour hearing on the case Oct. 10.

In the wake of the landmark University of Michigan case, Grutter v. Bollinger, the University of Texas adopted changes to its admissions policy. Those who finished in the Top 10 percent of their class were granted automatic admission. For the remaining candidates, race was allowed to be a contributing factor in admissions decisions, but could not be the deciding factor by itself. After those changes, diversity at the university increased.

The plaintiff, a white student named Abigail Noel Fisher, did not finish in the Top 10 percent of her class, so did not qualify for automatic admission. When she was ultimately denied admission, she sued the university. The Fifth Circuit Court of Appeals sided with the university.

The Michigan case vote was close, 5-4. Justice Sandra Day O’Connor wrote the majority opinion, ruling that the law school had a compelling interest in promoting diversity. O’Connor has since been replaced on the bench by Justice Samuel Alito, which could lead to a different outcome this time, Parker said.

“Alito differs from O’Connor on race issues,” she said.

There’s another dynamic that could affect the ruling on the case. The court announced earlier this year, without explanation, that Justice Elena Kagan will not take part in the case. That move raises the possibility of a tie.

“If it ends in a 4-4 tie, the appellate court decision will stand,” Parker explained.

Parker added although the Fisher case involves a public university, the outcome will still have an impact on private schools that receive federal money, including Wake Forest.

The case presents an ideal topic for Constitution Day, according to Parker.

“We’ve all gone through the admissions process, so it’s an issue people can universally relate to,” she said. “It tells us a lot about our country – what do we think about race and what does the Constitution tell us to do about race today?”