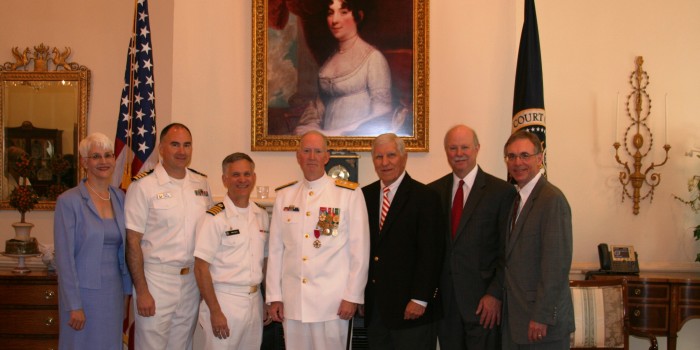 When Daniel O’Toole (’80) graduated from Wake Forest law school in August 1980, he knew about the handful of dreams that young lawyers share: representing one of the largest organizations in the world, judging a high-profile trial, designing part of a legal system, becoming a top trial lawyer, and venturing out to start a new law firm. Whatever his other dreams, that last one consumed his energy after graduation. The other dreams would have their moments.

Together with Anne Connolly (’80), Jeff Sherman (’80), and Marc Van Nuys (’80), O’Toole opened a new law firm immediately after passing the bar exam. O’Toole, who had taught economics at High Point University, and Sherman, who had an undergraduate degree in economics, made their business case to Southern National Bank (now BB&T); it’s impossible to know whether the bankers were impressed, curious about what would happen to the four rookie lawyers, or both. The four young lawyers, who set out on their own because they wanted to be working in court, not in a back room in supporting roles, did a broad range of work, from domestic relations to bankruptcy from their offices in the Wachovia Building (now Winston Tower).

“That was just as bold a move in 1980 as it would be today,” noted Professor Charley Rose. “It took extraordinary courage, and the four of them demonstrated exceptional skill.”

The firm was successful enough that near the end of their first year they moved to larger space in the Pepper Building up the street. About six months later, the firm started evolving: Sherman left private practice to join the U.S. Navy’s Judge Advocate General’s Corps. Before long, Sherman was recruiting his former partner, O’Toole.

“Jeff was fascinated by his new work, and he remarked that since I had gone to Catholic school, the discipline would be no problem,” O’Toole remembered. “Part of what we liked about our own firm was a diversity of work, and the Navy was a way to keep that breadth for our entire careers.”

O’Toole followed his former partner to the Navy in 1983. The beginning of O’Toole’s legal career — a pioneer lawyer, starting a firm from scratch — would be the model he continued to follow, and he would fulfill each of those other legal career dreams in unlikely and extraordinary ways. After building a strong reputation as a criminal and civil litigator in the Navy, he was assigned as one of the first staff judge advocates for a carrier battle group, working on the staff of an admiral aboard the USS John F. Kennedy, where he would be responsible for advice on international and operational law.

“George Walker’s international transactions class made it possible for me to assimilate and do my job in the battle group,” O’Toole noted.

The new job wasn’t limited to legal advice. “When I arrived aboard, the Carrier Group 8 chief of staff told me I’d have to stand watch for the battle group,” O’Toole said. In addition to his legal role, he spent a few weeks qualifying as a battle group watch officer, and then rotated through the watch positions, monitoring threats and other developments for the carrier and its retinue of strike and support ships. When his tour as carrier group JAG was over, he would spend six months writing and grading battle training scenarios with a group of officers from various branches of the Armed Forces because of his unique mixture of tactical and legal proficiency.

It turned out the battle group needed a lawyer. O’Toole briefed classified rules of engagement to the flight crews on the Kennedy in January 1989 when two of the ship’s F-14 Tomcats shot down Libyan MiG fighters over the Gulf of Sidra. Not everyone was pleased at his proximity to excitement, O’Toole said.

“My mother told me to please keep my head down since apparently I had a propensity for being in the wrong place at the wrong time.”

O’Toole had another tour at sea as carrier JAG on the USS Theodore Roosevelt, where he managed the equivalent of a small law firm serving the needs of more than 5,000 sailors in addition to offering command counsel. Back on land, the Navy offered O’Toole a chance to specialize.

“I had enjoyed my time in the Navy so far, but I wanted to choose a specialty that would be marketable, or perhaps help me begin a career as a teacher, after the Navy, so I chose environmental law.”

After earning an LL.M. from George Washington University, he became the first regional counsel for the Navy with jurisdiction covering EPA Region 3 (the mid-Atlantic region) and then became the environmental lawyer for the Atlantic Fleet. He returned to the life of a trial lawyer after 18 months and served as chief prosecutor in Norfolk, then managed the JAG civil litigation division. Clearly a jack of all trades, he garnered further success directing management and plans for JAG headquarters before moving to what he assumed would be the last post of his Navy career.

“The common theme for all those years and all those diverse things he did was that he did them really well,” said Vice Admiral James Houck, recently retired judge advocate general of the Navy. “On the carrier, he was the No. 1 lieutenant commander. In the litigation division, he was the No. 1 litigator. When he was in management and plans, Tim Young, retired Navy assistant judge advocate general, said ‘he’s the best guy we’ve ever had do this job in my entire memory of the JAG corps.’ ”

Meanwhile, the friendships from the law firm remained strong. Van Nuys had joined the Air Force JAG Corps.  Sherman and O’Toole were both now senior Navy lawyers. A romance had kindled between O’Toole and Connolly, and they married in 1999. Connolly moved to the Washington, D.C., area and became the fourth former member of the firm to work for the government: she is an assistant general counsel for the Naval Criminal Investigative Service, or NCIS. “It’s handy that there are TV shows to help our kids explain what we do,” Dan O’Toole quipped.

Now promoted to Captain, O’Toole was appointed executive assistant to the general counsel of the Navy, making him a top corporate lawyer for the United States Navy, which would be the 18th largest company in the world by revenue. While the JAG Corps is an enormous uniformed law firm, focusing on the operational side of the Navy, the general counsel’s office is the business law firm for the organization: contracts, fiscal oversight, and real estate issues. As executive assistant to the general counsel, O’Toole worked on some of the largest contract disputes in the world, classified programs, and billion-dollar litigation cases.

This was no ordinary corporate law position. In the wake of Sept. 11, 2001, the military was holding new kinds of prisoners and desperately seeking new kinds of information. Strong voices were advocating for “enhanced interrogation” techniques, and the general counsel of the Navy became the point person for arguing against enhanced interrogation in military circles. As the general counsel’s right hand, O’Toole leveraged the quiet but extensive network of executive assistants throughout the Pentagon to coordinate the efforts of the uniformed Judge Advocates General and the Navy General Counsel as they advocated against this powerful trend.

“I’ve had wonderful chances to work on the parts of the law that everyone holds dear but most lawyers never touch,” O’Toole said. “I took Constitutional Law from Professor Jim Bond because I thought it would be interesting, but I have used it constantly.”

By 2004, O’Toole had served for 20 years and reached the pinnacle of a career in the Navy. But there was one more thing he wanted to do, and the Judge Advocate General of the Navy granted the request. After 24 years as a lawyer, O’Toole became a trial judge. “It was the best job I’ve ever had,” he added.

Best job, perhaps, but some of the most intense scrutiny as well. Along with his bench in Norfolk, O’Toole was appointed as a trial judge for military commissions in Guantanamo Bay, Cuba, presiding over the trials of enemy combatants. He would later serve on the U.S. Court of Military Commission Review as well — the intermediate appellate court with jurisdiction over military commissions.

As a judge, O’Toole continued his tradition of doing things really well, earning repeated approbation as the top trial judge across the Navy and Marine Corps. In 2008, the Navy turned to Dan to address one of its most significant problems: a judicial system lagging under the burden of a heavy caseload and unable to meet its goals for timely trials and appellate review. He served briefly as the chief judge of the Navy and Marine Corps Court of Criminal Appeals, and then as the first chief judge of the Department of the Navy with responsibility for all courts in the Navy’s justice system. From 2008 to the present, the Navy and Marine Corps has met every guideline established by the Court of Armed Forces Appeals. “Zero defects: that’s Dan O’Toole’s record,” remarked Admiral Houck.

Professor Rose can’t imagine a better role model for Wake Foresters. “Dan’s reputation for diligence and integrity is second to none, and because of the opportunities in his singular career, he has brought honor to the entire profession,” Rose said.

Now that Admiral O’Toole has retired, he’s been replaced as the third-ranking member of the Navy JAG Corps by Captain Michael Quinn (’82, JD ’85), assistant judge advocate general for civil law. “Before I retired,” O’Toole noted, “two of four one-star leadership positions in the JAG Corps were held by Wake Forest graduates.”

What explains the concentration of leadership from a relatively small southern law school? “I had mentors who surpassed any expectation. I’ve stayed in touch with George Walker, and Charley Rose has been a mentor throughout my career: he never tells me the answers, but asks the essential questions. He’s one of my biggest supporters.”

Admiral O’Toole has amassed not one, but five achievements many young lawyers dream about. “I don’t look back at my career as something that I’ve done,” O’Toole said, with characteristic humility. “Amazing circumstances have presented themselves and I’ve worked through them. It’s remarkable to look back and see the shape of my career.”