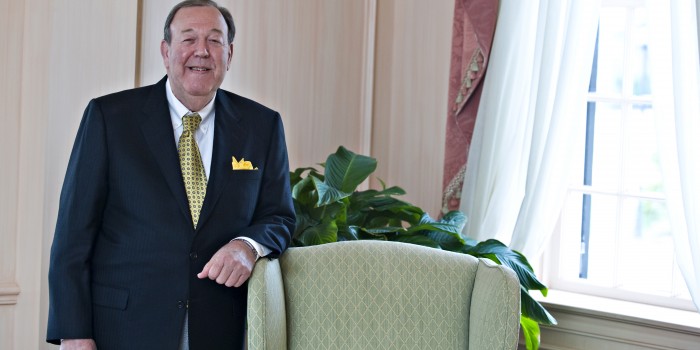 Jim Swisher’s love for the Wake Forest University campus is not the result of his lawyer’s mind objectively weighing the pros and cons of his years there.

It’s a visceral love that dates to the summer he first visited the newly opened campus in Winston-Salem, with its spindly trees and patches of red clay left by the recent construction.

Swisher (’61, ’62) came as an undergraduate and was admitted to the School of Law during the second semester of his junior year–a tribute not so much to his extreme intelligence, he said, but to Dean Carroll Weather’s flexibility toward an eager student.

“The law school is the joy of my life,” he said. “I’m so grateful I had the pleasure of being there.  I can’t praise them enough.”

Swisher, a partner in Cahoon & Swisher in Greensboro, has served on the Board of Visitors and he has been a major contributor to the transformation of the Worrell Professional Center. His gift will go toward the creation of the new boardroom. His reason for that particular gift? The School of Law asked him.

“The law school has done so much for me,” he said. “Whatever they asked me for, I would have done.”

He remembers his years at the School of Law as golden ones, full of the excitement of being on a new campus, a sense of fellowship and a wonderful cadre of professors.

“The professors knew you, they knew your name, they knew who you were,” he said. “It was a real close-knit group.”

Professor Robert E. Lee was one of the school’s characters and a man Swisher describes as having a tremendous personality.

On his second day at the School of Law, Lee pulled Swisher aside after his class in domestic law. Lee had written the textbook for the course and Swisher was the only student who had not yet bought the book.

“Mr. Swisher, do you plan on passing my course?” Lee said. “You best buy my book.”

Shortly before graduation, his professors steered Swisher’s course by putting  him in contact with Robert Cahoon (’42), the man who would become his partner, until Cahoon’s death in 2006.

“He’s probably the smartest man I’ve ever been associated with,” Swisher said. “He knew how to communicate with everyone and his level of intellect was unbelievable.”

He and Cahoon maintained a general law practice, which fit in perfectly with his liberal arts background, interest in the community and Wake Forest training. His brother, the late Roger Swisher, served the town of Kernersville as mayor for more than 20 years.

“You get to meet everybody,” he said. “There’s a new adventure every moment.”

He was able to hit the ground running with his School of Law degree, Swisher said. It’s important that Wake Forest enable a new generation of students to do the same in a field that is rapidly changing and increasingly complex.

“They’re doing everything they can to train the young lawyers to walk out and engage in any legal undertaking,” he said. “How they accomplish that is going to take a lot of support. Those who’ve been blessed with a legal degree need to help.”