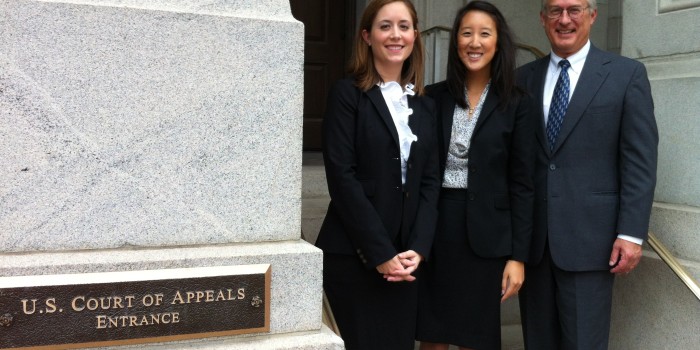 Group photo of Morgan McCall ('13), Kelley Chan ('13) and Professor John Korzen, director of the Appellate Advocacy Clinic, pose outside the United States Court of Appeals for the Fourth Circuit, in Richmond, Va.

McCall argued on behalf of James Estep, in the case of Estep v. Ballard.  Also representing  Estep are Kelley Chan (’13) and Professor John Korzen, the director of the Appellate Advocacy Clinic.

The issue on appeal is whether Estep’s trial counsel provided ineffective assistance in violation of his Sixth Amendment right to counsel.  As an 18-year-old, Estep committed a homicide and was charged with first-degree murder in West Virginia state court.

At trial, Estep’s counsel failed to object when the State repeatedly introduced evidence, and argued, that the victim was a “kind and gentle” man who performed various good deeds such as providing free food and firewood to the community.  Such evidence is inadmissible under Rule of Evidence 404.  The jury convicted Estep and sentenced him to life in prison “without mercy,” which under West Virginia law means he will never be eligible for parole.  Estep contends that his trial counsel’s failure to object to the “good character” evidence prejudiced his chances of obtaining life with mercy.

“Morgan made an excellent argument on Mr. Estep’s behalf,” Korzen said.  “She was very well-prepared and did a great job handling numerous questions from Judge Wilkinson and Judge Motz.  She earned high praise from the judges and other attorneys in the courtroom.”

Chan and McCall drafted the Reply Brief of Appellant over the summer.  Hannah Davis (’12) and Leslie Cockrell (’12) drafted the Brief of Appellant last year.  Fellow Clinic students, and Davis, judged McCall in three practice arguments, at which Chan argued for the other side.  A decision is expected by the end of the year.

The Appellate Advocacy Clinic is a two-semester course for 3Ls.  This year the Clinic currently has 10 students working on five appeals in three different jurisdictions.  For more information about the Clinic, contact Professor Korzen.