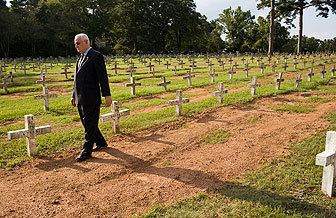 On the anniversary of the Sept. 21, 2011, execution of Troy Davis, whom many believe innocent of the shooting of a police officer in Georgia, several groups at Wake Forest University are joining together to discuss whether innocent people are wrongfully executed in North Carolina and the United States in a series of events to be held Sept. 20-21.

The first event will be a screening of the award-winning documentary, “At the Death House Door”  on Thursday, Sept. 20, at 7 p.m., in the Annenberg Forum, Carswell Hall, on the campus of Wake Forest University.

This film features the life and work of Rev. Carroll Pickett, a minister who spent the last hours with95 people executed by the State of Texas.  Dr. Pickett recorded his impressions after each execution and believes that he tragically witnessed the wrongful execution of five men, including Carlos DeLuna.  Dr. Pickett and Peter Gilbert, the filmmaker, will be available for questions following the film in a session moderated by School of Law Innocence & Justice Clinic Director Mark Rabil.  This event is free and open to the public. 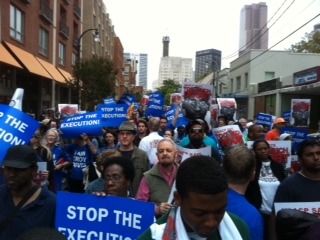 Protesters march against the Troy Davis execution in Atlanta in September 2011.

The second event will be a news conference on Friday, Sept. 21, at 10 a.m., at the new office of the law school’s Innocence & Justice Clinic, 2596 Reynolda Road, in Winston-Salem.  At the news conference, Dr. Carroll Pickett, Darryl Hunt, Kristin Parks (J.D. ’95) and Clinic Director Mark Rabil will answer questions regarding the issue of innocents on death row.  Parks will also discuss the case of her client, Melvin White, who is on death row in N.C., despite strong evidence of innocence and troubling forensic evidence presented by the N.C. SBI Lab, now reorganized as the State Crime Lab.

The third and and final event, a panel discussion, will be held following the press conference at noon  in Room 1312 of the Worrell Professional Center concerning the issue of innocence and capital punishment.  The panel includes Rev. Carroll Pickett, Darryl Hunt (exoneree), and Kristin Parks (J.D. ’95), and will be moderated by  Clinic Director Mark Rabil.   The panel will discuss specific examples of past and present cases of innocent people on death row.   This event is free and open to the public.

These events are sponsored by:  The Wake Forest University Institute for Public Engagement, the law school’s Innocence and Justice Clinic, and the WFU Department of Religion and the Documentary Film Program.