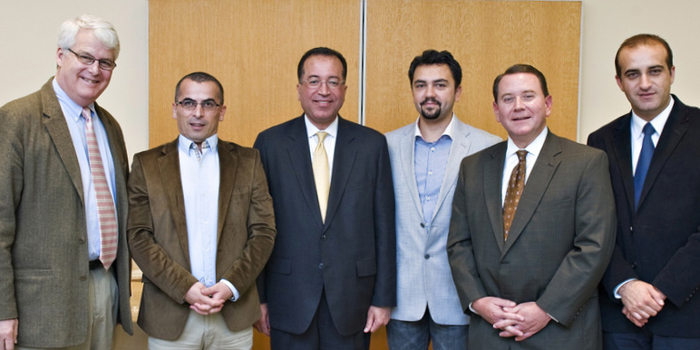 Robert J. “Bobby” Higdon (’85, JD ’89) hears heart-wrenching stories every time he visits Kosovo, where he is helping rebuild the country’s judicial system after decades of internal strife and war.

Higdon, an Assistant U.S. Attorney in Raleigh, N.C., spearheads an ongoing U.S. Department of Justice initiative to develop criminal and civil procedures in Kosovo, a part of the former Yugoslavia which declared its independence in 2008.

Higdon and Frank Bradsher (’82), also an Assistant U.S. Attorney in Raleigh, visit Kosovo frequently to train prosecutors, judges, defense attorneys and police officers. In the last three years, they’ve made about a dozen trips each to teach investigative techniques and legal procedures and to offer advice on ongoing investigations and trials. The program is the only one of its kind between a U.S. Attorney’s Office and a foreign country, Higdon said.

“We are so fortunate to live in a country where the rule of law is respected,” Higdon said. “We benefit so much from a court system and criminal justice system. It’s not perfect, but it functions really well and keeps us safe.

“In Kosovo, they don’t have that or they haven’t had that for so long. We feel it is incumbent to share what we can to help them. Otherwise there’s no explanation for why a couple of prosecutors from North Carolina get invited to go over to Europe to teach people in a country that’s existed a lot longer than ours.”

Kosovo is rebuilding its justice system with the scars of war still fresh. Higdon says he is frequently approached by people with terrible stories who ask for his help finding long-lost relatives. “Everyone has a war story or near-death experience or can tell you what family members were killed” during the war, he says. “Many will tell you they’re alive because the U.S. intervened and stopped the war.”