In this the season of giving, Chris Beechler (’01) will be giving the gift of life this week when he donates a kidney to fellow Winston-Salem lawyer Dave Pishko, who was Beechler’s former professor at Wake Forest law school.

“It certainly surprised me,” stated the grateful recipient. “Not that it was Chris, but frankly, that there are people in the world who are that selfless … It’s just such an incredible gift.” 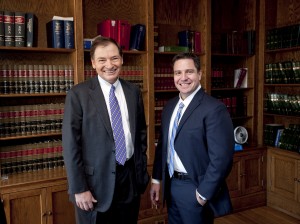 Chris Beechler (right) will donate one of his kidneys to his friend and fellow lawyer, David Pishko (left). Beechler said, "Why not do this for a friend?"

Beechler, a sole practitioner, is the immediate past chair of the NCBA’s Criminal Justice Section while Pishko, who practices with Elliot Pishko Morgan, is a member of the Litigation Section and an adjunct professor at Wake Forest law school.

Pishko – if his name sounds familiar, it’s because he’s one of the lawyers working to exonerate Kalvin Michael Smith in the high-profile Silk Plant Forest beating case — has a hereditary condition called polycystic kidney disease.

His father had it, and he’s known since his mid-20s that the day might come when he would need a transplant.

“Some people can finish out their life, and it never totally destroys their kidneys,” said Pishko, 61. “Statistically (kidney failure) happens when you’re in 60s, and that’s what I’ve been expecting.”

A few months ago, he got the word from his doctors. You’re close. Start asking around for a donor.

Over lunch not too long afterward, Pishko told Beechler, 40, what was going on.

“His reaction was, ‘I’ll give you one. I’ll get tested,’” Pishko said. “It stunned me. We’ve been friends for a long time. He didn’t hesitate. Chris can kid around, but he made sure I knew he was serious and that I didn’t have to ask.”

And so the testing began. Round after round, it’s a tedious and time-consuming process with plenty of built-in opportunities for a would-be donor to back out.

By all accounts, Beechler never considered backing out. Even though he had plenty of reasons to, including an 11-month-old son named Cash. He gathered all the evidence. He consulted his family, doctors and other donors before making his decision.

“You don’t know what to say,” Pishko said. “There’s no good way to show your appreciation other than to go through with it and try to stay healthy.”

Naturally, Pishko’s family was relieved and elated that a donor was found so quickly. What is a little surprising, though, was how quickly Beechler’s family warmed to the idea.

“I love him, and I think he walks on water,” said Alli Tomberlin, Beechler’s wife. “I’m a little nervous for him, but I can tell he’s ready. I feel like this is what we’re supposed to be doing.”

After consulting their calendars, the two men came to the conclusion that sooner was better than later. Pishko isn’t on dialysis yet, but without a transplant it’s only a matter of time. Surgery is scheduled for Thursday morning.

“I asked my doctor 10 times if I really had to go through with this, and couldn’t it just get better on its own,” Pishko said. “He assured me that it wouldn’t and that I needed to do this.”

The two families sealed the deal over Thanksgiving, when they all met at Beechler’s home for dessert. Red kidney-shaped cookies were served.

“Why not do this for a friend?” Beechler said. “When I thought about what it could provide for him, his family and the people he may touch in the future … it will cost me nothing more than time, inconvenience and some short-term pain.”

Tags: Alumni, in the news