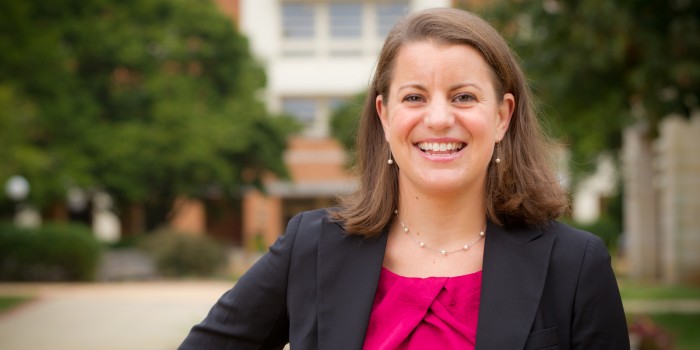 Francie Scott (’04) has been named the new Associate Director for the Office of Career & Professional Development (OCPD).

Scott joined the Office of Career & Professional Development as assistant director in August 2011. She replaces Kala Taylor who resigned from the position in early January.

“Her drive, commitment, and understanding of the career and professional development processes make her a valuable asset to the office, and we look forward to her continued leadership on the OCPD team,” says Kim Fields, director of the Office of Career & Professional Development, which helps students conduct their job search and match them to careers that dovetail with their interests.

Of her three alma maters, Scott said she has always felt the most connected to Wake Forest. She met her husband, Bryan Scott (’04) of Kernersville, at Wake Forest and they have two young boys. Her husband practices with Spilman Thomas & Battle PLLC in Winston-Salem.

“I felt like the professors, the staff and the dean’s office all gave us a lot of attention and were concerned about us,” she said.

Scott says she  entered law school with the idea that law is a versatile profession. She didn’t necessarily intend to go to private practice, the traditional path for many aspiring lawyers.

She was a few years into a career with a large law firm in Richmond, Va., advising companies on employee matters when her father died.

“I realized I needed to make a big change,” she said. “I needed to do what I cared about.”

Those feelings led her to do pro bono work with children in the foster care system. From there, Scott returned to graduate school where she interned with the Chatham County Teen Court, managing cases for the juvenile justice diversion program, and at Prevent Child Abuse North Carolina in Raleigh, where she helped develop materials about child abuse and drafted grant proposals.

Making a connection with people and working for a better world are two legacies from her father.  She followed in his footsteps when she went to Zimbabwe in the Peace Corps after earning her bachelor’s degree. She was in the country during a time of political upheaval and saw how difficult daily life was. That experience gave her a perspective that helped her during law school’s toughest moments.

“I don’t need to worry about where my next drink of water is coming from or have to walk four miles to school,” she remembers saying to herself.

While the recession has made job hunting more difficult for students in all fields, Scott said that ultimately, it may force students to think creatively, consider alternatives and to build careers that offer more than just financial rewards.

Many law students don’t realize the number of options available to them, or that there are alternatives to working in a law firm.

Her focus is on ensuring students take into account their personal interests and strengths when job hunting, and not just salaries or prestige.  Law students can find fulfilling careers in nonprofits, start-up companies and government, she said.

As someone who has made the journey from a traditional law firm to the social service sector, Scott said that she looks forward to making students more aware of the range of opportunities available.

“It’s very rewarding for me to have a student come and say, ‘I think I’ve got it figured out,’” she said.