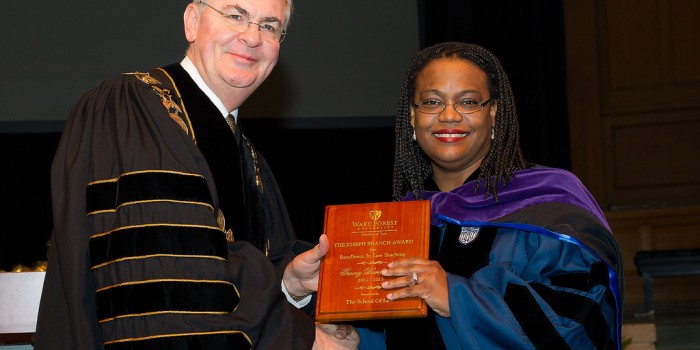 Law Professor Tracey Banks Coan was presented the Joseph Branch Excellence in Teaching Award during the Wake Forest Founders’ Day Convocation on Thursday, Feb. 21.
The award was presented during the annual event in Wait Chapel that celebrates the University’s founding in 1834 and the accomplishments of faculty and alumni in teaching, research and service.
Professor Coan was recognized for her work in developing and directing the law school’s Academic Success Program (ASP). Students state that the lessons they learned in Professor Coan’s Secured Transactions course challenged them and gave them the confidence they needed to succeed.
Professor Coan is an experienced legal research and writing professor.  When she joined the Wake Forest law faculty in 2001, she taught in the Legal Analysis Writing & Research (LAWR) program.  During the 2004-05 academic year, she  began dividing her time between teaching in the LAWR program and working to develop and formalize the Academic Success Program.
“During that time, we expanded ASP to include a targeted weekly skills-building program for 1Ls, peer-led study groups for most bar-tested courses, a “bar preview” program for 3Ls, periodic 1L workshops, and 1L practice exams,” she explained.
In 2005, she received the Graham Award for Legal Research and Writing Excellence in Teaching.
In fall 2010,  Professor Coan became the full-time director of the Academic Success Program and began teaching Secured Transactions.
“In keeping with my commitment to improving academic performance, I’ve designed my Secured Transactions course to enhance analytical precision and develop students’ ability to evaluate and improve their own learning process,” she explained.
Before joining Wake Forest, she was Associate Counsel for Jefferson Pilot Financial (now Lincoln Financial Group), a national financial services organization, and an associate with Brooks, Pierce, McLendon, Humphrey & Leonard, LLP a leading business law firm in Greensboro, N.C.
The Joseph Branch Excellence in Teaching Award was established in 1985 to honor Wake Forest alumnus Joseph Branch (JD ’38, LLD ’83) upon his retirement from the North Carolina Supreme Court.  Branch embodied the humanistic, student-centered approach to legal education that is the law school’s heritage. Recipients are chosen from the School of Law faculty on the basis of outstanding teaching and service to the legal profession.