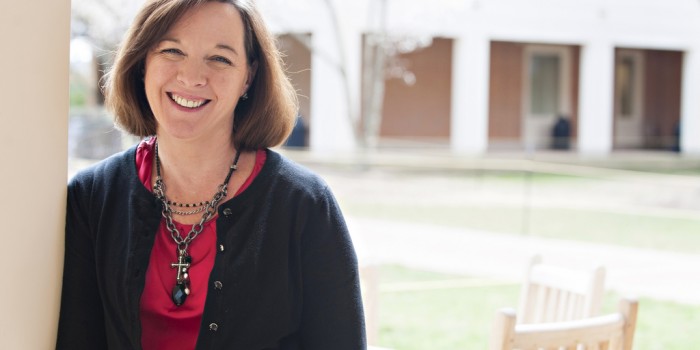 Fiona McCormick grew up in Wales and has lived in Germany and Korea as well as five different states.

Now as the new director of International Graduate Programs, she assists international graduate students and legal professionals navigate what for them, is the foreign territory of Wake Forest Law.

“I enjoy meeting people from different cultures and countries,” she said. “I like working with them and assisting them in navigating what can seem a very complex application process.  From explaining our programs, to helping them figure out how to apply and then communicating with them throughout the admission process until their arrival on campus.”

Once the students arrive, McCormick’s job is to help them make an easy transition to campus life. The International Graduate Office provides assistance to LL.M. students and Visiting International Researchers who visit the law school for one semester.

Having lived abroad for numerous years, McCormick empathizes with international students, who are trying to acclimate to the American culture at the same time that they are studying law or conducting serious research.

“Just trying to adjust to a new country, learning a new culture can often be daunting, so I can only imagine how hard it is coming to the U.S. as an international student, trying to study a completely new legal system in English,” she said.

McCormick received her bachelor’s degree in Public Administration from the University of Glamorgan, Wales. She worked as a management analyst in the resource management division of the U.S. Army in Germany where she met her husband.  They moved to the United States after two years of marriage and the peripatetic couple has lived in many different states to include Virginia, Pennsylvania, Georgia, North Carolina, Florida and Kansas. They’ve lived in 16 different houses in all.

While in Pennsylvania, McCormick started her career as a staff assistant in the international office at Pennsylvania State University, Dickinson School of Law. After a few months, she was promoted to reading files and processing applications for the Masters of Law program. She continued to move through the ranks until she became Assistant Director of Admissions.

McCormick left that job in January to come to Wake Forest Law, but has not given up her travels. She recently returned from trips to Ecuador and the Galapagos Islands, where she enjoyed seeing the many different birds and animal species that captivated Darwin, and to Japan and South Korea where she visited LL.M. alumni and prospective students.

Through the LL.M. students, Wake Forest Law J.D. students are able to gain an understanding of the law in other countries.

“Having international students in the classroom allows our JD students to hear a more diverse perspective on today’s legal issues,” McCormick added.