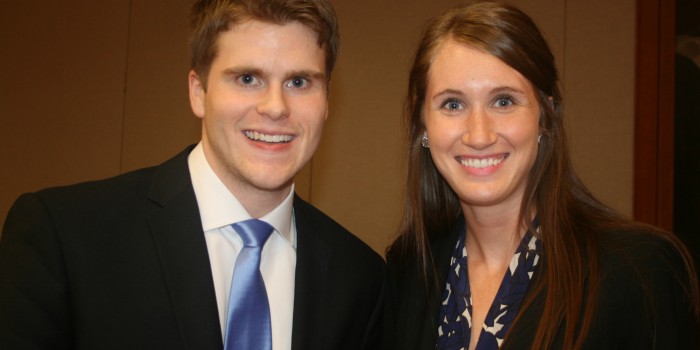 The final round showcases the top two first-year law students in the moot court competition.

Arguing a fictitious case about whether a woman is entitled to keep the engagement ring after the engagement is called off, Adams was able to successfully argue in favor of the plaintiff Percy Pettigrew. Fellow first-year law student Kelsey Meuret represented the defendant Denise Daniels.

The judges were highly complimentary of both finalists.

“It took us a long time to decide because it was so close,” Judge Reynolds explained. “Mr. Adams I was really impressed with your argument because I thought Ms. Meuret had the law behind her. You made best on what I thought was a difficult argument.”

Judges Gale and Peake added that they both represented Wake Forest well.

“You both did a fantastic job and it was a great argument,” Judge Peake said. “Ms. Meuret I thought you did a good job framing your argument.”

The summary of the case that was at issue follows:

The Plaintiff Percy Pettigrew met the Defendant Denise Daniels while he was attending Hampden-Sydney in Virginia. The two began dating and fell in love. Six months later, Pettigrew proposed to Daniels, giving her what he alleges is his grandmother’s family heirloom engagement ring. The next semester, Daniels was forced to leave Hollins University to take care of her seriously ill mother in North Carolina. Daniels did not return to Hollins that semester.

After moving back home, Daniels heard rumors that Pettigrew was dating her old roommate at Hollins University. Pettigrew then broke off his engagement with Daniels by changing his Facebook status from “in a relationship” to “single.” When Pettigrew requested his grandmother’s engagement ring back from Daniels, Daniels refused to return the ring because it reminded her of “his better side.”

The event, which is held each spring for first-year law students, fielded 86 initial competitors. Each student wrote a brief and argued twice, once “on-brief” and once “off-brief.” After two weeks, 19 students were invited to join Moot Court, and the top 16 competed in the following week in an elimination tournament leading up to the final round.

Adams was not the only student to take home an award. Distinctions for Best Brief, Best Oralist, including runners up, and the Debbie Parker Memorial Moot Court Service Award were also awarded.

The 2013 Walker Moot Court Competition co-chairs are Linda Boss and Lindsay Watson. “We really appreciate everyone who participated,” Boss said. “We thought you all did a great job.”