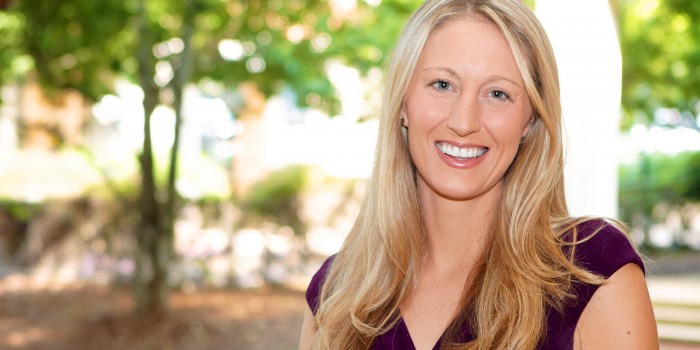 As an undergraduate at Washington and Lee University, Wake Forest Law Professor Abigail Perdue opted to major in English and biology, over the strong objections of her faculty adviser.

Perdue, now an associate professor of Legal Analysis, Writing and Research, who has published on topics ranging from genetic discrimination to reproductive surrogacy, can look back and smile.    She is also the founding director of the Wake Forest in Washington Summer Judicial Externship Program and she has a Core Appointment with the Center of Bioethics, Law, and Policy.

“I always tell students if there is something you are interested in and passionate about,” she said, “you can find a way to make it work.”

As a child, Perdue wanted to become a veterinarian until she discovered that her passion for animals was better satisfied by getting a pet and doing charitable work for the Society for the Prevention of Cruelty to Animals. She also considered becoming a doctor, but she didn’t like the way the balance in medicine has tipped from patients to paperwork.

An older sister, who was in law school at Washington and Lee, reminded Perdue that she found helping others to be most fulfilling,  that she liked writing and researching, and that she wanted a job that meant something. That sounded like a promising start to a legal career. Perdue sat in on some of her sister’s classes, talked to other law students and her professors, and eventually decided to go to law school.

During her first year at the University of Virginia School of Law, Perdue worried that she was going to lose her connection to biology. But by her second year in law school, she was taking a vast array of employment law courses as well as Bioethics, Health Law, Law and Medicine, and Genetic Law.

Her first job as an employment attorney at Proskauer Rose in New York City enabled her to handle Title VII cases as well as legal inquiries regarding the impact of the Genetic Information Nondiscrimination Act where her law school background in science proved advantageous.

Having always had a strong interest in law teaching, Perdue ultimately left the practice to teach at Washington and Lee, where she taught Diversity and Discrimination in Employment Law and Higher Education, Cases and Controversies in American Law, and co-taught a course on genetic law, ethics, and policy with a Philosophy Professor Gregory Cooper.

Perdue’s legal education would not have been complete, however, without her experiences  as a federal law clerk.  In 2010, she left Washington and Lee to clerk for Judge Mary Ellen Coster Williams on the United States Court of Federal Claims, which handles government contract cases, vaccine law, and other matters in which U.S. citizens are suing the federal government for monetary damages.  In 2011, Perdue clerked for Judge Jimmie V. Reyna of the United States Court of Appeals for the Federal Circuit, which handles much of the nation’s most important intellectual property litigation.

“Judge Reyna and Judge Williams were incredible mentors who taught me how to be a better attorney but more importantly a person of integrity and honor,” she said of the experience.

Anxious to share her experiences and expertise with lawyers-in-training, Perdue joined the faculty of Wake Forest in August 2012.  As director of the Wake Forest in Washington Summer Judicial Externship Program, Perdue  intends to give students who want to clerk for federal judges a competitive edge.  “My goal is to design a course,” she said, “so that when the judge or law clerk gives the student an assignment, the student knows exactly what to do.”

Perdue also is designing a Vaccine Law seminar this summer, and she has served on the committee that designed the problem and judged the Maya Angelou Center for Health Equity (MACHE) Bowl. That event brings together teams of students from different disciplines and graduate programs to work on a case involving health disparities.  This year’s case focused on childhood obesity and diabetes.

Along the way, Perdue hasn’t forgotten her early love of animals. Her cocker spaniel, Violet Sofia, frequently accompanies her to the office and according to Perdue, chews up poorly written drafts. Perdue has also been swimming with sea lions and dolphins, snorkeled with sharks and stingrays, and even touched a manatee in the wild.  When she’s not playing with her nephews – Heath and Wyatt – or taking Violet for a walk in the park, you’ll find her boating, whitewater rafting, kayaking, doing pilates or yoga at the gym, or hitting balls at the batting cages.  An avid traveler, Perdue is also always planning her next adventure.  She has most recently set her sights on South America and the South Pacific.