Jeff Whittle (’91) makes a case for the Lonestar State 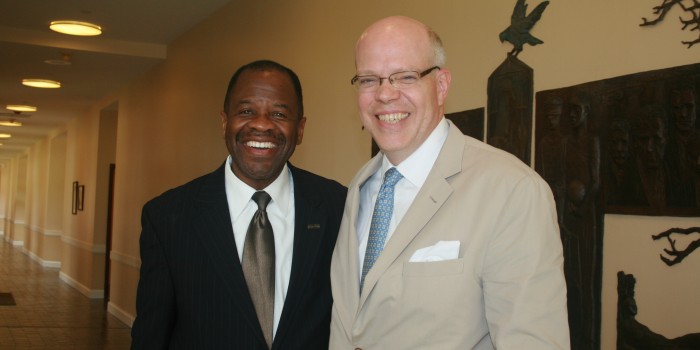 Texas a few years ago ran a seemingly ubiquitous ad promoting the state — its natural resources and its disparate topography, its diverse demographics and its regional yet universally craved food.

Texas is “like a whole other country,” says the ad, which is still used.

Wake Forest Law students should seriously consider moving there, Jeff Whittle (’91) told them during a luncheon on campus April 12.

Whittle, partner and the head of the Technology Law Section of Bracewell & Giuliani in Houston, talked about his career in law, his approach to management and the value of a JD/MBA, which he earned at Wake Forest in 1991.

And, well, he talked about Texas. For good reason.

The Lonestar State, he says, is No. 1 in the nation for wind energy capacity and biofuels production. It’s a major technology hub — Apple is expanding its Austin campus and Google is rolling out its fiber Internet service in that city — and is tops in electronics exports.

In particular, Whittle points to the energy sector.

“For the energy industry in Texas, in my view, something historical is going on today.”

That’s great news, because yesterday was tough. The energy downtown in the mid-1980s — followed by the Enron scandal and a bursting high-tech bubble — transformed Houston into a virtual ghost town, says Whittle, who holds a bachelor of science degree in electrical engineering from Vanderbilt University.

Oil prices have risen, due in large part to Asian growth, and new energy technologies — take, for example, Tesla Motors — and alternative energy resources have emerged. The potential for the vast Keystone XL pipeline project — the pipeline would transport tar sands oil from Canada to the central U.S. and to Texas refineries — is in many ways immeasurable.

“I think there is an energy renaissance going on, I think the media is picking up on this,” referencing the burgeoning convergence of high-tech and energy jobs.

The energy boom manifests itself in a demand for lawyers with energy credentials, a scenario that led to a November story in the Wall Street Journal, “Houston Lawyers Ride New Gusher.”

“The mergers-and-acquisitions field has been sluggish since the financial crisis,” the story says. “But thanks to high oil prices and a boom in U.S. drilling over the past decade, energy deals have been a steady bright spot. Oil and gas deals have accounted for about 13.5 percent of mergers-and-acquisitions volume this year compared with 5.3 percent a decade ago,” according to Dealogic.

That means boom times for Houston attorneys with oil-patch credentials and clients.

“International institutions such as Chinese- and Indian-owned energy companies have dumped billions into joint ventures with Texas-based oil and gas businesses,” the ABA Journal wrote in February.

The story continues, “The International Energy Agency — formed by 28 member nations to research energy issues and respond to disruptions in the oil supply — predicts in its World Energy Outlook 2012 that the U.S. will become the world’s top oil producer by the end of the decade, overtaking Saudi Arabia, and will be a net exporter of oil by 2030.

“There’s a lot of money flowing into energy and Texas right now,” Stephen Coats, a managing partner and general counsel at New York City-based Riverstone Holdings, a private equity firm with more than $22 billion in investments in the energy sector, including several billion in Texas, says in the story.

“I do a lot of setting up cases and investigations, decide that we should take the case and cue it up to our trial attorneys. I don’t do trials as much any more, as most clients want me on the transaction and strategy side.”

Whittle complemented his JD with an MBA, an academic combination with distinct and indispensible benefits, considering how the law inherently dovetails into business and vice versa.

“The lateral market is very hot … so hot we’ve had trouble keeping associates from big law firms from New York and other firms in Texas,” Whittle says. “We’re paying a lot more the big Texas firms, and we’ve had to bump up pay comparable to what they would make in New York City. Even corporations had to raise salaries … because they couldn’t hire any (new) talent.”

Says, the Wall Street Journal: “Recruiters and lawyers say firms are offering multiyear contracts of $2 million in annual compensation to partners, a 50 percent bump or more for some local lawyers. Pay guarantees are offered as enticements.

“Experienced associates—who can earn about $240,000 in total compensation including bonuses—are generally seeing a 10 percent to 20 percent raise for switching firms, these people say, a significant boost in an industry typically with regimented pay scales.”