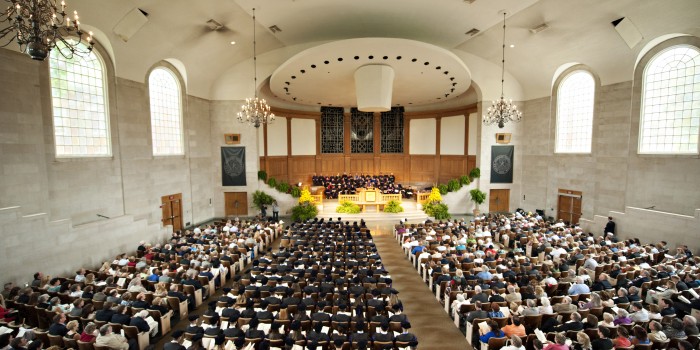 The Wake Forest University School of Law conferred hoods on 183 graduates on Sunday, May 19, in Wait Chapel. The graduates included the first two to earn the Scientiae Juridicae Doctor degree and the first nine to earn the Master of Studies in Law degree.

The law school’s 39th annual hooding speaker, Thomas L. Sager (’76), Dupont Legal vice president and general counsel, told the graduates and their families that it was because of Wake Forest Law that he has realized the success he has experienced. “It prepared me so well,” he said. “You have matriculated from one of the finest law schools in the nation and you will soon realize how well it has prepared you.”

Sager added that many of the graduates will embark on a career in the legal profession, which remains a noble profession for many. “As lawyers, if we do not take care of the how, the what doesn’t matter,” he explained. “I know you can make a buck, but can you make a difference? Please keep in mind it’s not the position or the money, it’s whether you made a difference. I know everyone of you will make a difference in the years to come.”

Executive Associate Dean for Academic Affairs Suzanne Reynolds congratulated the class of 2013, which received a standing ovation from family and friends in the audience.

Dean Blake Morant described this graduating class as being made up of a group of individuals who are going to contribute to society in a great way.

“I make these comments with mixed emotions because I have bonded with you over the past three years I have seen you grow not only in terms of your intellectual abilities but as individuals who dedicated well over five figures of hours of pro bono legal work,” he said. “I know you will continue to thrive and I know you will do not only for yourselves, but for others.”

Dean Morant added the graduates’ degrees are an investment for a lifetime and that 73 percent of the class donated to Class of 2013 3L campaign. “I thank you and applaud you for all you have done and for all the great things you are going to do.”

A diploma ceremony was held in Wait Chapel this morning following Commencement exercises on Hearn Plaza.

Dean Morant announced that the third-year graduating class chose Barbara Lentz as “Professor of the Year” and Officer Charlie D as “Staff Member of the Year.” Professor Mark Hall conferred the hoods.

• Rory P. Agan of Enfield, N.H., received the American Bar Association and The Bureau of National Affairs Award for Excellence in the Study of Health Law.

• Dustin Timothy Carlton of Murfreesboro, Tenn., and John William Forneris of Clifton, Va.,  received the American Bar Association and The Bureau of National Affairs Award for Excellence in the Study of Labor and Employment Law, which is given to the students who achieve the highest grades in the course.

• Michael Dinesh Miranda of Morristown, N.J., received the Dean’s Award, which is given to honor the extraordinary contributions of a student leader.

• Matthew Thomas Houston of Beulaville, N.C., received the E. McGruder Faris Memorial Award and $200 cash, which is given to the student exhibiting the highest standards of character, leadership and scholarship.

• Kathryn Elizabeth Hatcher of Fuquay-Varina, N.C., received the Forsyth County Women Attorney’s Association Book Award, which is presented annually to an outstanding female graduate based upon her academic achievements, leadership, service to community, professionalism and commitment to the legal profession.

•  Maria Elizabeth Usher of Charlotte, N.C., received the Laura J. Gendy Award, a new award that was established by alumni, family and friends of Laura J. Gendy (JD’ 00) to provide an annual cash award in the amount of $500 to a graduating law student who exemplifies integrity, compassion for others and strength of character that were the hallmarks of Gendy, who died in August 2008.

• Timothy Pennell Broyhill of Winston-Salem, N.C., and Margaret Ann McCall of Richmond, Va., received the Robert Goldberg Award in Trial Advocacy, which honors the memory of Robert Goldberg, a student at the School of Law, who was killed in World War II. It is an annual cash award in the amount of $3,000 given to the students showing the highest aptitude and ethics in trial advocacy.

• Alexander S. Ingle of Wichita, Kan., received the I. Beverly Lake Award, which was established in honor of I. Beverly Lake Sr., professor of law at Wake Forest University, practicing attorney, assistant attorney general of North Carolina 1951-1955, and retired Justice of the North Carolina Supreme Court. The annual cash award in the amount of $500 is given to the student or students in the law school exhibiting the greatest proficiency in the study of Constitutional Law.

• Kristina Marie Wolf of Westlake, Ohio, received the North Carolina State Bar Student Pro Bono Service Award, which is presented annually to a student who has contributed time and talent to law-related service.

Sager started his career with DuPont in August 1976 as an attorney in the labor and securities group. Sager helped pioneer the DuPont Convergence and Law Firm Partnering Program and continues to have oversight responsibility. Through his leadership, this program has become a benchmark in the industry and has received national acclaim for its innovative approach to the business of practicing law. He was named associate general counsel in 1994. In January 1998 he was named chief litigation counsel, where his responsibilities included oversight of all litigation and IS support for the entire function. He was named vice president and assistant general counsel in November 1999, and to his current position in July 2008.