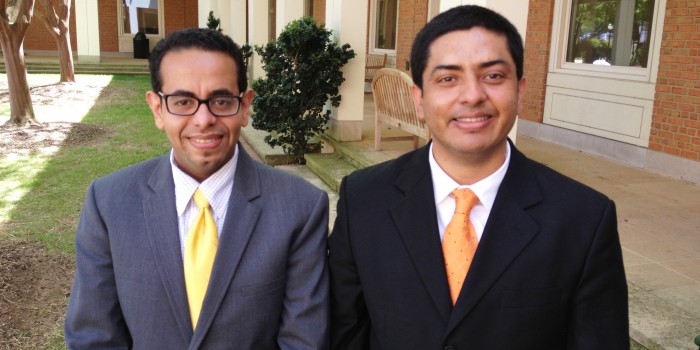 Wake Forest Law will confer its highest postgraduate law degree, the Doctoral of Juridical Science (S.J.D.) degree, for the first time this month.

After years of rigorous research and writing, Mohamad Basam of Saudi Arabia and Joel De Leon Quintero of Panama will receive their S.J.D.’s on Monday, May 20.

The S.J.D. program is designed for international attorneys and United States LL.M. graduates, who are pursuing academic or high-ranking government careers in their home countries.  Wake Forest Law developed the S.J.D. program “because we had a number of students in the LL.M. program who really wanted to deepen their studies, and they felt strongly that Wake Forest would be the best place to do it,” explained Professor Richard Schneider, associate dean of International Affairs.

The law school’s inaugural  S.J.D. candidate, Basam, was no stranger to Wake Forest.  After earning a Bachelor of Laws degree from King Abdulaziz University and working as an Assistant Teacher at the Institute of Public Administration (IPA), Basam graduated from Wake Forest’s LL.M. Program  in 2007.  Before returning to pursue an S.J.D. degree, Basam worked as a Lecturer and Coordinator of the Legal Programs at the IPA, where he taught government employees and young lawyers insurance law, contracts, administrative law, and legal writing.  Basam was also a part-time Legal Consular at the Saudi Ministry of Defense.  Basam’s S.J.D. studies were sponsored by his employer, the IPA.

The law school’s second S.J.D. candidate, De Leon Quintero, received a Bachelor of Laws degree and a Master’s degree in Criminology from the University of Panama.  He also earned a postgraduate degree in Higher Education at the Specialized University of the Americas and an LL.M. degree at the University of Notre Dame.  As a member of the Panamanian Bar Association, De Leon has worked for the Panamanian government for twelve years to fight corruption in the positions of Executive Assistant to the Accountant Attorney General, Assistant in the Electoral Prosecutor’s Office, and Assistant in the Anticorruption Prosecutor’s Office.  De Leon’s S.J.D. studies were sponsored by the National Bureau of Science, Technology, and Innovation of the Republic of Panama.

Unlike the LL.M. Program, which is a course-oriented degree, the S.J.D. Program is directed towards scholarly research and candidates are expected to produce a dissertation of publishable quality that contributes in an original manner to the area of law to which it is directed.  To guide Basam and De Leon in their research, each was assigned a faculty adviser from the law school who has expertise in their dissertation topics.

Basam’s dissertation topic regarding public administration made him a perfect match for Professor Sidney Shapiro, who had served as his LL.M. faculty adviser.  Shapiro was eager to work with Basam again.  As he explains, “I have admired Basam’s dedication to learning and to using his knowledge in ways that can benefit his country through an improved public administration.”

Basam added that Shapiro, who has authored many books and articles, “helped me gain a new perspective on my topic.”

Sharing his interest in criminal law, De Leon was matched with Professor Ronald Wright. Wright was more than happy to work with De Leon because he found his proposed topic on corruption to be “extremely interesting” and was eager to advise a student on a “more advanced level.”  De Leon found Wright’s guidance invaluable.

“I was fortunate to have an adviser who had previous work experience with my topic [and] is very familiar with the legal system in Central America,” De Leon said.

To culminate their years of research and hard work, Basam and De Leon defended their work to their dissertation committees, along with other faculty members and law students, at the end of the spring semester.

Basam successfully defended his dissertation, entitled “Toward a Legal Framework for Public Private Partnership In Saudi Arabia.”  Of Basam’s performance, Shapiro was proud to report that he “did an outstanding job responding to our questions and providing a defense of his thesis.”

De Leon also defended his dissertation, entitled, “The Effectiveness of Strategies to Combat Corruption under the United Nations Convention and the Inter-American Convention against Corruption (With a comparative overview emphasizing Central-American Countries and Panama),” excellently, according to Wright.  “It was a glorious moment when Joel completed his degree requirements and the whole room cheered!”

As he approaches graduation, De Leon is excited about his future professional life. “An S.J.D. degree opens many doors,” he explains.  De Leon plans to return to his work fighting corruption for the Panamanian government and will continue teaching as a part-time professor at the university level.   De Leon will also help the organization that sponsored his studies interview new applicants who want to pursue postgraduate degrees in the U.S.

Basam plans to return to the IPA as a better law instructor.  “I learned from Shapiro many methods of teaching to and reaching students [and] how to present the information in a comprehensible way,”  he said.

Basam also plans to publish his dissertation with hopes that it will benefit Saudi Arabia and other developing countries.  When asked what he will miss most about WFU, Basam replied, “After six years at WFU (in the LL.M. and S.J.D. programs), I do not know where to start. I am going to miss everything.”

Dean Schneider is immensely proud of Basam and De Leon.  “I can’t imagine two better candidates to be our first graduates,” he said.  “I know that they will take their Wake Forest S.J.D. degrees and do great things back in their own countries.”

Schneider also predicts great things for the S.J.D. program in the future. “I see a steady presence of very high quality S.J.D. students in the Law School,” he said.  “I am very excited about that prospect.”