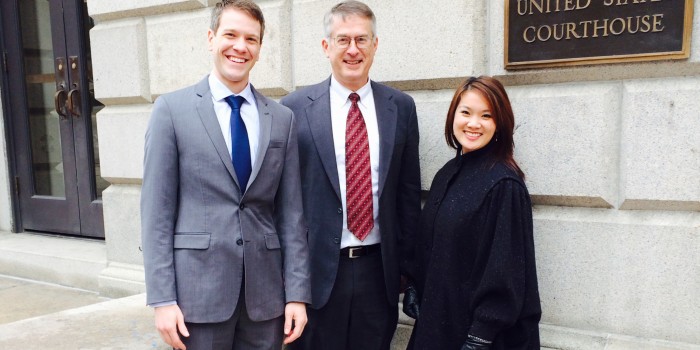 Wallace argued in a bankruptcy case, In re Jason H. Gold, that presents issues of first impression for any federal circuit:  whether, and under what circumstances, bankruptcy judges have discretion to award a Chapter 7 bankruptcy trustee a fee less than the percentage amounts set out in 11 U.S.C. § 326.  Lower courts have disagreed on these issues following Congressional amendments to the bankruptcy code in 2005, specifically to 11 U.S.C. § 330, which also governs trustee compensation.  The Fourth Circuit assigned the appellate clinic as amicus in support of the lower court’s decision.

Due to the importance of the case, there were two amicus briefs filed, both in support (at least in part) of the appellant and against the Clinic.  One amicus was the United States of America on behalf of the United States Trustee, while the other was the National Association of Bankruptcy Trustees.

Joining Wallace in Richmond were Tammy Hsu (’14) and Professor John Korzen (’91), the Director of the Appellate Advocacy Clinic.  Hsu researched and drafted the brief along with Wallace.

“Pat Wallace did an outstanding job at oral argument,” Korzen said.  “He was persuasive and poised throughout, and he made impressive adjustments on the fly, including where to start his argument and when to include references to questions the judges had posed the other side.  I could not be more pleased with his oral argument or with the brief that he and Tammy Hsu put together.”

An opinion is expected within the next three months.