Shortly after graduating from Wake Forest Law, Terry Hutchens’ (MBA ’74, JD ’77) paternal grandmother summoned him to her house to receive his graduation gifts. His grandmother had raised eight children, was accustomed to plain speaking and lived a very simple life.

She instructed Hutchens to pick up a paper bag that contained a $5 bill and told him to spend it however he wished.  She also gave Hutchens a brass key ring that said, “honest lawyer.”

“I want you to look at that every day,” she said, “because I don’t think there is such a thing.”

His grandmother was not the only person who was skeptical about Hutchens’ potential as a lawyer. Some of Wake Forest Law’s application committee hadn’t been sure that the MBA student with a rather average undergraduate career would succeed as a lawyer.

Hutchens, who counts a good work ethic and determination among his assets, launched his legal career in 1982 with a staff of seven. Today the Hutchens Law firm employs more than 250 attorneys and staff and has offices in Fayetteville, Charlotte and Wilmington.

And Hutchens still carries the key chain everywhere with him, in his briefcase. 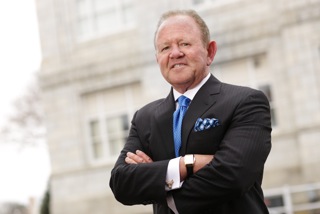 He is grateful to Wake Forest Law for taking a chance on him and he has tried to return their faith in him with a generous record of giving. He and his wife, Rosalind, who have been married for 44 years, have made a significant campaign pledge, which includes a commitment to name the Hall of Fame and a donation to the Law Fund.

“It was a stretch, I know, for the law school to let me in. I was a real test,” he said. “I probably didn’t deserve to be there and they took a chance on me.  Wake Forest Law has had a big part in whatever success I have achieved.”

Hutchens was attending North Carolina State University as an undergraduate and working at the Stag Shop on Hillsborough Street, when he got to know some of the lawyers and judges who came into the shop. He would sometimes go to the courthouse to watch trials.

“I thought it looked like a lot of fun,” he said.

He was admitted to the law school and began his first year in the fall of 1974. His first year of law school was difficult, but he felt that he had made the right decision.

“The professors were legends committed to turning out the best lawyers in North Carolina.  And, we had a terrific class,” he said. “I couldn’t have picked a better time to be in law school.  But, I was anxious to get out of law school and go to work”

In his second year at law school, Hutchens started a company that did research for companies in North Carolina, using law students and young lawyers to do the research. Someone approached the company about a case involving an illegitimate child.

Hutchens returned to campus and tracked down Dr. Robert E. Lee a former dean who was the acknowledged expert on family law in North Carolina, who agreed to help with the research.

In the early years of his career, Hutchens found himself involved in a lot of real estate and real estate development work.

“I had an interest in business–whether business litigation or counseling business people. Most of the big business was real estate or bank-related,” he said. “As I became involved with so many aspects of that work, I became comfortable and stayed with it.”

The persistence that helped Hutchens get into law school helped him build his practice, he said.

He has been active in fundraising for Wake Forest Law and is pleased with the direction the law school has taken.

He describes Dean Blake Morant as an outgoing, charismatic figure, who has positioned Wake Forest Law to train the next generation of lawyers.

Several years ago, he heard that one of the deans wanted to build the school’s reputation nationally and broaden its recruiting efforts across the country.

“My thought was, ‘This is a North Carolina institution and it should continue doing what it does best, to train folks to be North Carolina lawyers,’” he said. “Now I’m glad that the law school went in that direction. There’s no doubt in order to survive as an institution that that was necessary. The dividend that has come from that decision has worked for everyone.”