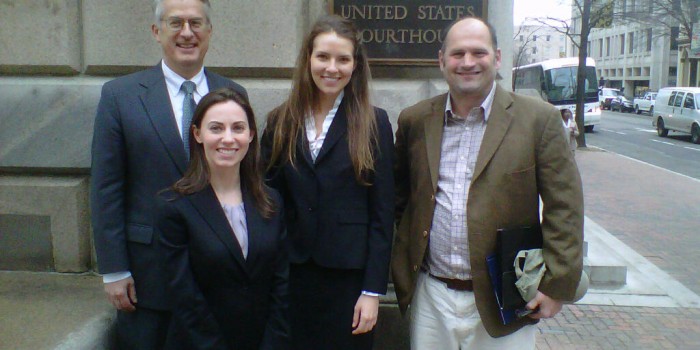 Professor John Korzen  (’81 BA, ’91 JD) will argue one of the Appellate Advocacy Clinic appeals, CTS Corporation v. Waldburger, in the Supreme Court of the United States on Wednesday, April 23.

Korzen is the director of the Appellate Advocacy Clinic. “All 10 of  the Clinic’s current students have been helping with the research, briefing, and the oral argument preparation, and they will all attend the argument, too,” Korzen said. “Since 2007, we have gone every year to hear oral arguments at the Supreme Court, and this year’s visit coincides perfectly with one of our own appeals.”

Emma Maddux (’13) argued the case in the United States Court of Appeals for the Fourth Circuit, in Richmond, Va., on Jan. 30, 2013, as part of the Appellate Advocacy Clinic.

Maddux argued on behalf of 23 plaintiffs in Waldburger v. CTS Corporation, a civil nuisance action.  Also representing the plaintiffs on appeal were Hillary Kies (’13) and Professor Korzen.  The plaintiffs, who live near Asheville, allege that the defendant contaminated their property and well water by releasing hazardous wastes into the environment. The issue on appeal is whether a limitations period in the federal CERCLA environmental statute, which allows plaintiffs to sue after they know or should know of their harm, preempts periods of repose such as the one contained in N.C. Gen. Stat. § 1-52(16), which can bar claims before plaintiffs are even aware of their harm.

In July 2013, the Fourth Circuit ruled in the Clinic’s favor by reversing the district court’s earlier decision to dismiss the case based on the North Carolina statute.  Federal courts are divided on the preemption issue presented by the case, including a 2-1 circuit split.

The Fourth Circuit argument was the first time the Appellate Advocacy Clinic faced two opposing counsel at once. In addition to the defendant’s counsel, an attorney for the United States argued as amicus counsel in support of the defendant.

CTS Corp.  petitioned for certiorari last year, and the Supreme Court granted certiorari on Jan. 10, 2014. Since then, the Clinic’s students have been hard at work with research and oral argument preparation.  For example, they will act as Justices at a “moot,” or practice, argument before the real thing.

“Working on a case at the Supreme Court and attending the argument, in a case with important nationwide ramifications, should be a memorable culmination to all of the students’ law school experiences,” Korzen said. “They have learned a lot about real-world appellate practice all year through their other appeals, and this experience takes the Clinic to another level.”

The high court scheduled the oral argument for Wednesday, April 23, and Professor Korzen will make the oral argument for the respondents.  Allison Zieve at Public Citizen is his co-counsel and has been a great resource, according to Korzen.  As in the Fourth Circuit, attorneys for both CTS Corporation and the United States will argue against the Clinic.

“Having a case at the Supreme Court is simply the most challenging and most rewarding experience one can have in the practice of law,” Korzen added.