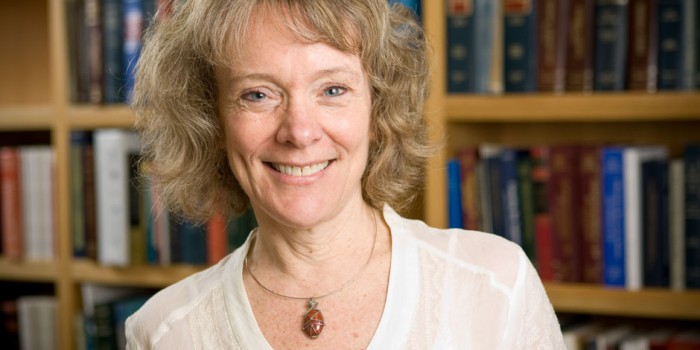 The article “The Gay Marriage Case That Makes No Sense,” which was published on Slate.com on May 2, 2014, refers to Executive Associate Dean for Academic Affairs Suzanne Reynolds as “having written the book on family law” and Reynolds says, “UCC clergy would be liable for a penalty only if they purported to marry a couple for civil purposes. On the other hand, if clergy performed what was purely a religious ceremony, the law would not apply.”  The full text of the article follows from Slate.

Earlier this week, the United Church of Christ made headlines when it filed a federal lawsuit challenging North Carolina’s ban on gay marriage. The suit makes a novel argument: Because state law makes it a crime for a minister or other religious official to marry a gay couple—yes, you read that right, a crime to marry a gay couple—the law violates their religious freedom. This time, it is pro-gay ministers trying to stand up for their rights and the rights of gay couples.

The fairest reading of the law suggests that the state doesn’t care one bit about what a church does for religious purposes.
Gay rights supporters were unequivocal in deriding the North Carolina statute. Evan Wolfson, the dean of the marriage equality movement, told the New York Times that North Carolina legislators have “put in place a measure that assaulted the religious freedom that they profess to support by penalizing and seeking to chill clergy that have different views.” Mark Joseph Stern pulled no punches in Slate: “Anyone legitimately concerned about the rights of believers to practice their faith as they wish should be appalled by North Carolina’s marriage laws. The threat of a minister going to jail simply for celebrating a gay marriage is a real, and terrifying, affront to the very premise of ‘free exercise’ of religion.”

I share their sentiments. And, to be clear, there’s no question that the church would have a slam-dunk case if North Carolina jailed ministers over the weddings they perform. But here’s the thing: No minister has gone to jail because North Carolina’s law doesn’t necessarily do what the United Church claims. In fact, the fairest reading of the law suggests that the state doesn’t care one bit about what a church does or does not do when it comes to marriage—as long as the wedding is done for religious purposes.

Here’s what the law actually says:

No minister, officer, or any other person authorized to solemnize a marriage under the laws of this State shall perform a ceremony of marriage between a man and woman, or shall declare them to be husband and wife, until there is delivered to that person a license for the marriage of the said persons …
In plain English: If—and this is a big if—you are going to “declare” a couple to be married “under the laws of” North Carolina, you’ve got to go get a license from the state before doing so. Otherwise, you could get in trouble. But if you’re not trying to have the marriage recognized under North Carolina law, the statute simply has nothing to say to you. That’s even clearer with respect to gay couples (note the “husband” and “wife” language), given that gay marriage is not legal in North Carolina (at least not yet).

That reading seems obvious enough, but I called Suzanne Reynolds, a law professor at Wake Forest University who literally wrote the book on North Carolina family law, to make sure I wasn’t out to lunch. And she agreed: UCC clergy would be liable for a penalty only if they purported to marry a couple for civil purposes. On the other hand, if clergy performed what was purely a religious ceremony, the law would not apply. “We have some bizarre statutes,” Reynolds told me, but the North Carolina marriage statutes are “pretty typical.”

Jonathan Martel, UCC’s lead lawyer, told me that he disagrees with my reading of the law. He says that “the natural reading” of the statute “does prohibit a purely religious ceremony.” Another lawyer for the church told me that at least one UCC minister has performed a same-sex marriage in North Carolina and the church knows of no actual or threatened prosecutions, though she says clergy fear this.

While he thinks one could argue that the law’s language is ambiguous, Doug Laycock, a leading scholar on religious liberty who has informally advised the church’s lawyers, says the law as written offers the North Carolina attorney general an easy out. The state can just argue the statute doesn’t apply to ceremonies that are purely religious. “The state ought to be upfront about that,” he told me, “and that would be a sort of a win for the church”—and a win for the state too, because the statute would stand. Martel demurred when I asked him about this. “We’ll address that if and when the AG takes that position,” he said.

In any event, this case should give liberals serious pause. If the UCC ends up arguing that North Carolina law must recognize gay marriage for the sake of the clergy’s religious freedom, then the church’s case hinges on the Constitution requiring the civil definition of marriage to conform to a religious definition. The UCC’s definition happens to be one that aligns with mainstream liberal values, but another church’s definition of marriage, of course, could be the opposite. On this, the Rev. Clint Pressley, pastor of the conservative Hickory Grove Baptist Church in Charlotte, seems to have it right: “It boils down to a view on the authority of Scripture,” as he told the Charlotte Observer. To state the obvious, Scripture simply has no place in how civil society defines the institution of civil marriage.

Thanks to the Supreme Court’s decision last June striking down the anti-gay Defense of Marriage Act, marriage equality has enjoyed an unbroken winning streak in courts across the country on the basis of a far more straightforward argument: Gay couples are equal to everyone else. As Justice Antonin Scalia explained in his furious dissent, the logic of United States v. Windsor makes marriage equality “easy” and “inevitable.” Amen to that. Equal treatment is the best argument for gay marriage. We don’t need this new case.

View the original article on Slate.

Suzanne Reynolds is widely respected for her scholarship and teaching about family law and for her public service. She was a principal drafter of statutes that modernized the law of both alimony and of adoption, and she co-founded a domestic violence program that received national recognition by the ABA for providing legal assistance to the poor. Suzanne authored a three-volume treatise on North Carolina family law that has become the authoritative source for law students, lawyers, and judges, and for many years she has taught the family law portion of the bar review course.