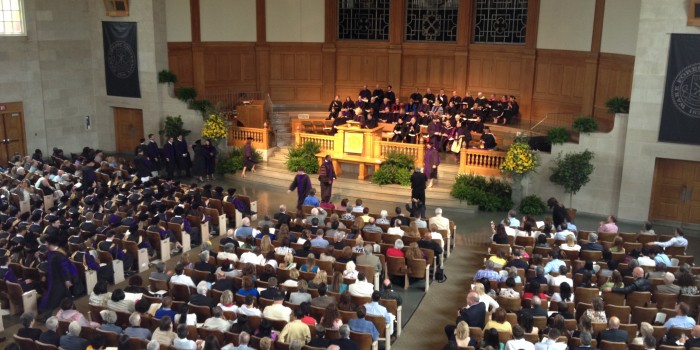 The law school’s 40th annual hooding speaker, the Honorable John L. Murray, told the graduates and their families “this is not a point of arrival but of departure. I have no doubt that the high standard of education you have received here has prepared you well, but I encourage you to remain lifelong learners.”

Murray added that is the duty of lawyers to act professionally, with integrity and serve their communities. “We give validity to the Rule of Law and we set an example for the rest of the world.”

Executive Associate Dean for Academic Affairs Suzanne Reynolds administered the oath and congratulated the class of 2014, which received a standing ovation from family and friends in the audience. “I can vouch that all these graduates have degrees and lots of brains,” she said.

Dean Blake D. Morant gave his closing remarks with mixed emotions. “I feel like these are some of my children going out into the world,” he said. “In these trying times, despite that tide, you have remained resolute and you are going to be the ones who change that tide. You are already my heroes,the graduates of Class of 2014. You are our future. I applaud you , congratulate you and implore you to do well and to do good.”

A diploma ceremony was held in Wait Chapel on Monday, May 19, following Commencement exercises on Hearn Plaza, where Murray received an honorary Doctor of Laws from Wake Forest University.

Dean Morant announced that the third-year graduating class chose Professor Tanya Marsh as “Professor of the Year” and Officer Charlie D as “Staff Member of the Year.” Professor Simone Rose conferred the hoods.

Among the award winners were:

• Kathryn E. Harvey of Nashville, Tenn., received the American Bar Association and The Bureau of National Affairs Award for Excellence in the Study of Health Law.

• Lucas David Garber of Charlotte, N.C., for Employment Law and Christina Michele Dennis of Hopewell Junction, N.Y.,  for Labor Law received the American Bar Association and The Bureau of National Affairs Award for Excellence in the Study of Labor and Employment Law, which is given to the students who achieve the highest grades in the course.

• Lee Dillon Denton of Winston-Salem, N.C., received the Dean’s Award, which is given to honor the extraordinary contributions of a student leader.

• Nathan Graham Harrill of Shelby, N.C., received the E. McGruder Faris Memorial Award and $200 cash, which is given to the student exhibiting the highest standards of character, leadership and scholarship.

• Laura Marie Twichell of Fayetville, N.Y., received the Forsyth County Women Attorneys Association Award, which is presented annually to an outstanding female graduate based upon her academic achievements, leadership, service to community, professionalism and commitment to the legal profession.

•  Allison Rebecca Levene of Stamford, Conn., received the Laura J. Gendy Award, a new award that was established by alumni, family and friends of Laura J. Gendy (JD’ 00) to provide an annual cash award in the amount of $500 to a graduating law student who exemplifies integrity, compassion for others and strength of character that were the hallmarks of Gendy, who died in August 2008.

• Philip Sean Baejter of Unionville, Penn., and Matthew Francis Meyers of Fairport, N.Y., and Erik Edward Hawkins of Detroit, Mich.,  and J. Austen Irrobali of El Paso, Texas, received the Robert Goldberg Award in Trial Advocacy, which honors the memory of Robert Goldberg, a student at the School of Law, who was killed in World War II. It is an annual cash award in the amount of $3,000 given to the students showing the highest aptitude and ethics in trial advocacy.

• Brett Jared Chessin of Cinncinatti, Ohio, received the I. Beverly Lake Award, which was established in honor of I. Beverly Lake Sr., professor of law at Wake Forest University, practicing attorney, assistant attorney general of North Carolina 1951-1955, and retired Justice of the North Carolina Supreme Court. The annual cash award in the amount of $500 is given to the student or students in the law school exhibiting the greatest proficiency in the study of Constitutional Law.

• Linda Elise Boss of Jonesville, N.C., received the National Association of Women Lawyers Award, which is presented annually to an outstanding law graduate at each American Bar Association-approved law school.

• Juliana Rose O’Neill of Lansing, Mich., received the North Carolina State Bar Student Pro Bono Service Award, which is presented annually to a student who has contributed time and talent to law-related service.

Watch the recording of the Livestream webcast of the Hooding Ceremony 2014.