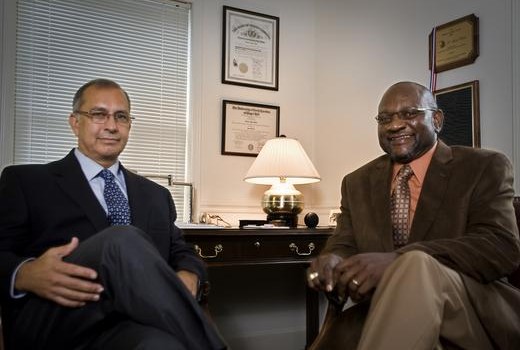 The Arizona Public Defenders Association (APDA) has invited Wake Forest Law  Innocence and Justice Clinic Director Mark Rabil and exoneree Darryl Hunt to speak at its annual conference in Phoenix, Ariz., on Thursday, June 26. Rabil is an assistant capital defender in Forsyth County whose zealous advocacy led to the release and exoneration of Hunt after 19 years of incarceration. In 1984, Rabil was court-appointed to assist a senior partner in his law firm in representing Hunt, a 19-year-old black man charged with the rape and murder of Deborah Sykes, a young newspaper copy editor in Winston-Salem. Though no credible evidence linked Hunt to the murder, he would spend nearly 20 years in prison trying to prove his innocence.

He and his attorney, Rabil, now speak across the country about Hunt’s ordeal to illuminate the issues of wrongful conviction, race and the death penalty. Joining Rabil and Hunt’s team at the APDA convention is Tarrah Callahan, Director of North Carolinians for Alternatives to the Death Penalty.

According to Rabil, they will discuss the history of the N.C. Racial Justice Act (2009-2013) and its implications for capital litigation in Arizona. During the talk there will be a film screening of “The Trials of Darryl Hunt.”

According to its website, the APDA Annual Statewide Conference is a three-day event that offers training on a diverse range of topics for attorneys, investigators, paralegals, mitigation specialists, and administrative support staff. Each year, APDA offers more than 100 classes to 1,200 conference attendees. The Arizona Public Defenders Association is a non-profit corporation comprised of all of the county, city, federal and tribal indigent representation offices and programs in the state.