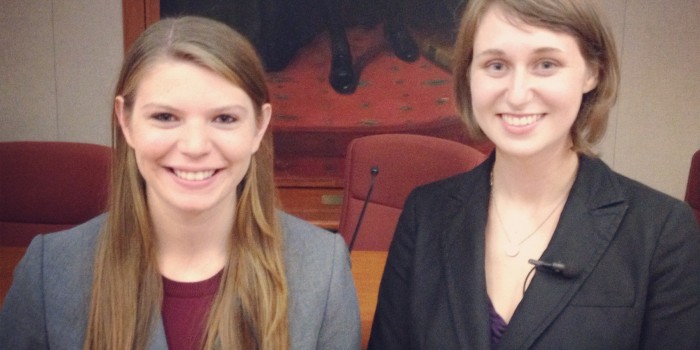 Mia Falzarano (’17) is the winner of the 2014 1L Trial Bar Competition Finals, sponsored by the Wake Forest Student Trial Bar.

The final argument, State of Worrell v. Garrett Walker, M.D., was held at 6 p.m. on Thursday, Oct. 2, 2014, in the Worrell Professional Center between Falzarano and Kayleigh Butterfield (’17), who was counsel for the defense.

After a hard-fought battle in front of the Honorable William L. Osteen Jr., chief district judge serving the Middle District of North Carolina,  he told the competitors that they both did an outstanding job. “Without using notes you both were tremendously well prepared and poised,” he said. “I give both of you high A’s.”

He added that while the competitors were only one point apart, Falzarano’s transition “was about as good as I’ve ever seen any prosecutor make.”

“We would like to thank the local practitioners who served as judges for the competition, and Professor Carol Anderson for her help in preparing the competitors for this year’s competition,” Delgado said. “We congratulate the winners and thank each of the participants.”

Elissa Hachmeister (’16) served as a judge for the competition. “There were less competitiors this year but the quality was extremely high throughout the competition,” she said.

STATEMENT OF THE CASE

This is a criminal action against Dr. Garrett Walker, personal physician to Francis J. Underwood, a well-known rock-and-roll artist with a drug habit. The State alleges that Dr. Walker committed manslaughter when he administered certain drugs to Underwood such that Dr. Walker was aware of but consciously disregarded a substantial and unjustifiable risk that the drugs would have a fatal effect.

STATEMENT OF THE FACTS

Dr. Walker had been at Underwood’s property when Underwood died. Walker claims that Underwood called him into the master suite complaining of shortness of breath after exercise. Walker alleges that he believed Underwood was “clean” and would have never given Senzaprine to someone with Underwood’s symptoms. Walker, however, believes that Senzaprine would only have been fatal if Underwood had actively been using an opiate, codeine or some sort of Vicodin. Walker claims that he left Underwood in the master suite with his medical bag when Little Frankie came in the room. When he came back into the room, Walker claims he saw Little Frankie slipping a hypodermic syringe into his boots.

Dr. Remy Danton performed the autopsy of Underwood. In his professional opinion, Underwood died on May 9, 2013, due to a massive cardiac arrest secondary to drug interactions.  The toxicology screening revealed levels of Senzaprine, adrenaline and hydrocodone. The report also revealed trace amounts of cocaine, THC (marijuana), ketamine and a chemical mixture of sodium hydroxide and aluminum powder.

Dr. Zoe Barnes was hired to testify for the defense. She believes that the administration of Senzaprine is proper if someone is complaining of shortness of breath. She testifies to Underwood’s reputation for quitting cocaine and her belief that Underwood could have easily hid hydrocodone use. Dr. Barnes also believes that it is possible that the heart attack could have occurred independent of the Senzaprine.