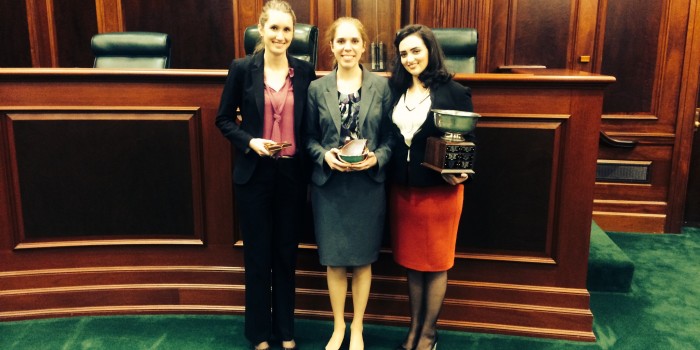 The team of Karon Fowler (’15), Caroline Massagee (’15) and Kelsey Meuret (’15) won the regional championship. Fowler also earned the Best Oral Argument award. By winning the region, the Fowler-Massagee-Meuret team advances to the national finals, in which 30 finalist teams from around the country will compete in New York City in February.

The team of Zachary Dunn (’15), Jasmine Pitt (’15) and Douglas Walters (’15) won the award for the Best Brief, with a score of 92.5, becoming the first Wake Forest team to win the Best Brief award at this competition in many years.

The National Moot Court Competition, now in its 65th year, is sponsored by the Young Lawyers Committee of the Association of the Bar of the City of New York and the American College of Trial Lawyers. Region IV encompasses the law schools within Kentucky, North Carolina, Virginia and West Virginia, and is sponsored by the Virginia Bar Association Young Lawyers Division. This year 19 teams entered the regional competition, with one or two teams each from Campbell, Duke, Elon, George Mason, Regent, Kentucky, Louisville, North Carolina, Richmond, Washington and Lee, West Virginia and William and Mary.

The Dunn-Pitt-Walters team defeated a team from Campbell before losing to a team from George Mason. The team narrowly missed advancing to the elite eight.

The faculty advisers for the teams were Professor John Korzen and Professor Charles Rose. The teams earned the awards through much hard work and a strong love for advocacy. After completing their briefs in mid-October, the teams had numerous practices before judges composed of faculty members, alumni attorneys, and non-alumni attorneys.

This year’s first-place finish was a repeat for Wake Forest. Last year, the team of Austen Irrobali (’14), Justin May (’14) and Lindsay Watson (’14) also won the regional championship in Richmond, with Irrobali taking home the Best Oral Argument award.

The problem for this year’s National Moot Court Competition involves two questions:  under the Equal Protection Clause, whether sexual orientation is entitled to heightened scrutiny in the context of a peremptory strike of a juror; and the proper interpretation of the term “direct” in the Foreign Trade Antitrust Improvements Act.