‘Focus on Ferguson: Discussion on Race, Justice and a Future Hope in America’ to be held Wednesday, Dec. 3 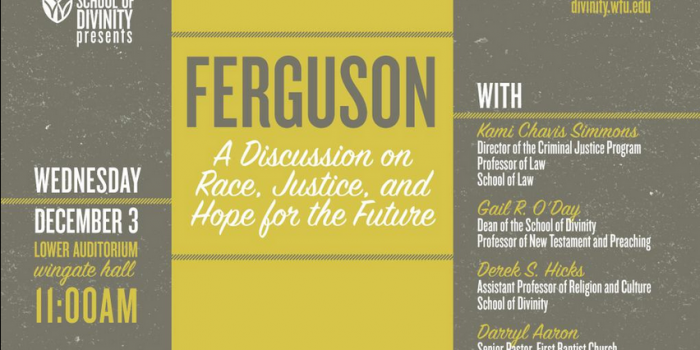 The Wake Forest University School of Divinity will host a forum and panel discussion at 11 a.m. Wednesday, Dec. 3, in Wait Chapel, Lower Auditorium, regarding the events of the police shooting of Michael Brown in Ferguson, Mo., and the grand jury decision that the officer will not face criminal charges.  “Focus on Ferguson: Discussion on Race, Justice and a Future Hope in America” will include a panel discussion of faculty members, including Kami Chavis Simmons, director of Wake Forest Law’s Criminal Justice Program, and Derek Hicks, assistant professor of Religion and Culture, and Divinity School Dean Gail O’Day. First Baptist Church Senior Pastor Darryl Aaron will also participate in the panel discussion.

All members of the Wake Forest University community are encouraged to attend this forum.

According to CNN.com, a week after the streets of Ferguson boiled over after protesters learned the officer who shot teenager Michael Brown won’t face criminal charges, tensions are still simmering. Pockets of protests continue to erupt across the country, including a demonstration that interrupted a speech Attorney General Eric Holder gave in Atlanta on Monday night.

“Michael Brown’s tragic death at the hands of a police officer and the events in Ferguson that followed have  reignited a larger debate about law enforcement and democracy in our society,” Simmons said. “It is important to continue a dialogue in which we examine these issues, develop collaborative solutions, and implement strategies for reform.”

Simmons has been interviewed by international media regarding the Ferguson, Mo., events. Learn more from her faculty profile and follow her on Twitter @ProfKamiSimmons