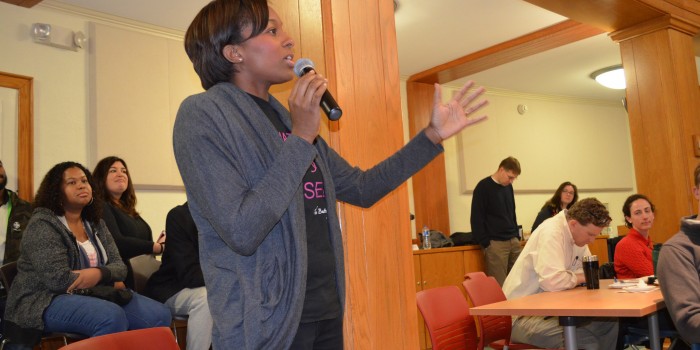 ‘Ferguson: Discussion on Race, Justice and Hope for the Future’

Wake Forest University School of Divinity hosted a forum and panel discussion on Wednesday, Dec. 3 in response to the police shooting of Michael Brown in Ferguson, Missouri, and the grand jury decision that the officer will not face criminal charges. The forum was inspired by a need to bring, conversation, connection, and understanding across the student body and campus community. “Ferguson: A Discussion on Race, Justice, and Hope for the Future” included Gail R. O’Day, dean of the School of Divinity and professor of New Testament and Preaching; Derek S. Hicks, assistant professor of religion and society at the School of Divinity; Kami Chavis Simmons, professor of law and director of School of Law’s criminal justice program; and Darryl Aaron, senior pastor of First Baptist Church Highland Avenue in Winston-Salem. With standing room only, students, faculty, and staff from across the college and professional schools were in attendance.“Ferguson exposes the enduring pain of the racial division that has been present in this country since its inception,” O’Day said in her opening remarks. She also cited that the immediate catalyst for this conversation and why the School of Divinity hosted the forum was in response to the Nov. 25 letter from Wake Forest University President Nathan O. Hatch, sent to the entire campus community before Thanksgiving, regarding the incident of persons allegedly rolling the University Quad after the grand jury verdict, an expression normally done after celebrating a victory. “Celebrating the verdict as a victory showed me such a lack of empathetic engagement with pain, suffering, and brokenness that silence was not an option.”

Moderated by Shonda Jones, associate dean of admissions and student services at the School of Divinity, attendees were asked to meet and discuss with those around them the question, “What is the key issue for you?” Responses included, “I am interested in keeping my son alive,” “Not only is this a race issue, but also an issue of law because the law justifies these actions,” and “Michael Brown is tried everyday even though he is no longer with us, however Officer Darren Wilson, who is with us, is not.”

The same question posed to the audience was then directed to the panelists. Professor Derek Hicks told a story of personal experience growing up in the Watts neighborhood of Los Angeles of being stopped by a police officer who revealed he was checking to make sure Hicks owned the vehicle since it was a nice car. Hicks also spoke to the debasement of black bodies and how they are only seen as threatening and opportunistic. Cnce the opportunistic piece is removed only the idea of threat remains.

Law professor Kami Chavis Simmons spoke of the 1991 police beating of Rodney King and the exoneration of these officers. “For this to be 23 years later, why are we still grappling with these same issues?,” she said. “Our focus needs to be on changing the law and you have to have the will of the people to change it.”

“The onus should not be on black men to change the perception that people have,” Simmons continued. “We should start with the question, ‘if this were my son or daughter, how would I perceive it?’ The way we frame a question can change the dominant social perspective. There’s nothing that black men can or should do, it’s on other people.”

Another catalyst that can change the social perception that black men are a threat is for those who know what is right to begin to do what is right, said Darryl Aaron. “America’s soul is at hand right now. Humans do not slide down the holy canal dehumanizing each other.”

Attention then turned to actions to create future hope in America. Derek Hicks said citizens have to allow themselves the time and space to engage one another, to find the real issues people are grappling with, which can be uncomfortable. “An effective place for this to occur is at the curricular level,” he said. “Studies have shown that educational institutions are better when they have diverse faculty. Not just racially and in gender, but putting resources in having faculty who can speak to a variety of experiences so that others can draw and learn from them.”

Simmons was asked about the legal lessons of Ferguson. As a former prosecutor who specialized in law enforcement and police accountability, Simmons referenced a quote from Dr. Martin Luther King, Jr. “Injustice anywhere, is a threat to justice everywhere,” she said. “There are many injustices in what happened in Ferguson.” From the prosecutor and how the grand jury was handled to the first amendment violations with peaceful protestors early on, Simmons believes that the huge microscope on Ferguson should be directed to the nation’s entire legal system.

Adding to Simmons’ point, O’Day urged for everyone to vote, references the low voter turnout in the recent elections in North Carolina. “Local elections matter,” she said. “They matter first and they matter most. Law don’t change culture, but can change what’s possible.”

During the time of Q&A, questions and remarks resonated with several of the matters addressed by the panelists. A freshman at Wake Forest said, “After hearing the verdict, I have become very angry and terrified. I’m 19 and feel in danger for my life. Is there anything that can be said to comfort me?” A second-year law student asked, “To have these conversations, we need people at the table. How do we engage people who need to be at the table?”

Local clergy member Darryl Aaron responded with a charge to the community. “Too often we put too much pressure on our leaders to direct us where we need to go. We need a strong grassroots movement.”

Derek Hicks echoed by saying, “We have to create space where more individuals are funneled through, where these types of conversations are forced. Not in an e-mail, but meeting face-to-face.”

After the panel ended, Lance Henry, a joint MDiv and Juris Doctor student, said, “What I have realized is that we are all social engineers. The ethical and moral formation that happens in our society has to lead on this issue. It goes back to what Dean O’Day said is the root of the problem. A lack of imagination across our society in not being able to see and empathize with any reality but their own.”

Sherine Tomas, a first-year divinity student, felt a true sense of hope after experiencing the openness of the dialogue. “Hearing the dialogue about the issue and listening as it transformed into creating strategies for change made me feel hopeful. I believe we all are now more focused on creating change ourselves.”

Beth Hopkins, the School of Law’s director of outreach and professor of practice, shares in the hope for future action. “We cannot become paralyzed by the emotion of fear, “ she said. “The utilization of fear is a mechanism for control, and as a people we have to be stronger and braver than submitting to the confines of fear. Therefore, it is incumbent upon our people to teach our children about our rich history so that we can move forward rather than spin within an endless cycle of pointless mobility.”

This story was co-covered by the WFU School of Divinity and WFU Law School.