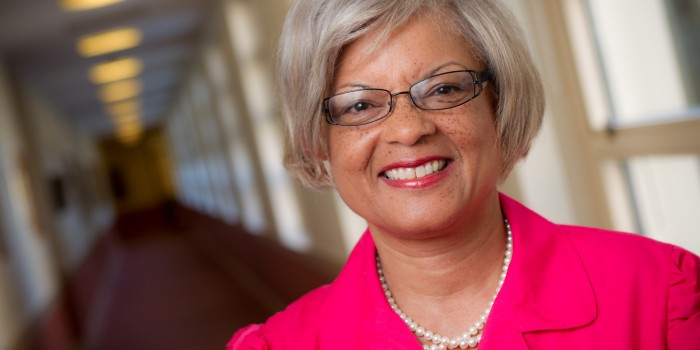 Katrina M. Adams will make history in two ways when she becomes chairman of the board, CEO and president of the United States Tennis Association (USTA).

When she begins serving her two-year term beginning Jan. 1, 2015, she will be the first African-American leader of the USTA and the first former tour professional in the position.

Winston-Salem’s Beth Hopkins, a well-known tennis advocate, knows Adams and praises her as a “very dynamic woman.” Hopkins serves on the USTA Constitution and Rules Committee as vice chair now, but Adams has appointed her chair under her administration.

“She is a leader of tremendous passion and love for people and tennis,” Hopkins said Thursday, Nov. 20. She said it will be an honor to work in her administration.

The USTA is the national governing body for tennis in the United States and the leader in promoting and developing the growth of tennis at every level — from local communities to the highest level of the professional game, according to a news release.

The Constitution and Rules Committee reviews proposed constitutional changes, bylaws and regulations to promote clarity and make sure all provisions conform to one another, Hopkins said.

“We’re going to see a lot of good things happening” under Adams’ administration, such as expected growth as more people of color are attracted to tennis because of Adams’ leadership.

Adams has served on the USTA board of directors for 10 years and is completing a two-year term as first vice president.

A news release says Adams is a contributor on CBS Sports Network’s first all-female sports show, “We Need to Talk” and serves as a television analyst for the Tennis Channel.

She also is a contributor to Tennis Magazine and tennis.com, providing instruction articles and videos, and serves as the executive director of the Harlem Junior Tennis and Education Program in New York City.

Adams played for 12 years on the Women’s Tennis Association (WTA) tour and was ranked as high as No. 67 in singles and No. 8 in doubles. She captured 20 career doubles titles. While a player, Adams served on the board of directors of the WTA as a player representative for four one-year terms and on the WTA’s Players Association for five two-year terms. She received the WTA’s Player Service Award in 1996 and 1997.

Hopkins, director of outreach for the Wake Forest University School of Law, is a tennis advocate. She grew up in Petersburg, Va., but her tennis passion was not sparked until she took a physical education course at Wake Forest. She graduated from the university in 1973. She has exhibited a passion for tennis ever since.

Hopkins says she has participated in all the organizations at all levels. Her son David has followed his mother’s footsteps, but in a more professional role: David Hopkins works for the Southern section of the USTA in Atlanta.

Hopkins starts her new role as chair of the USTA Constitution and Rules Committee next year.
“This is going to be a great journey for tennis and the community,” Hopkins said.

Read the original article in The Chronicle.