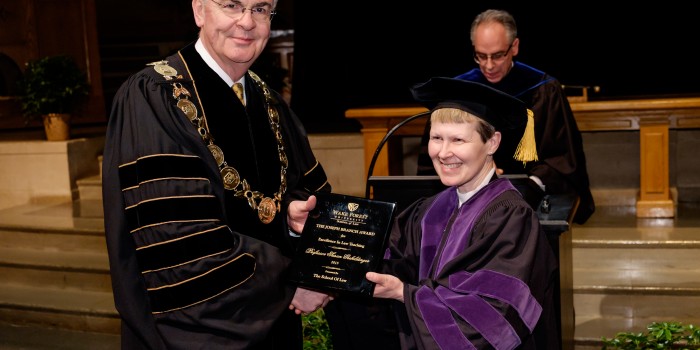 The Joseph Branch Excellence in Teaching Award was presented to Professor of Law Sue Grebeldinger at the Wake Forest Founders’ Day Convocation on Thursday, Feb. 19, 2015, in Wait Chapel. In presenting the award, Provost Rogan Kersh said, “I will start with the remarkable range of courses she teaches including Animal Law, an area of which she has particular interest.”

Professor Grebeldinger joined Wake Forest Law in 1991.  In addition to Animal Law, she teaches Civil Procedure I and II, Legal Research and Writing II, Employment Law, Employment Discrimination and the Legal Methods Course in the law school’s Master of Studies in Law program.

“I am delighted that Professor Grebeldinger is the 2015 recipient of the Branch award,” explained Interim Dean Suzanne Reynolds. “As her colleague of many years, I’ve been so impressed with Professor Grebeldinger’s high standards for teaching. I am happy to be a part of recognizing her excellence in the enterprise that means the most to the experience of our students.”

Reynolds continued, “No one commands more respect in the classroom than Professor Grebeldinger.  She impresses upon her students the importance of mastering the legal process by making every minute of her classes count.  She organizes meticulously and executes masterfully.”

Grebeldinger earned a JD from Yale University in 1984 and a bachelor of arts from the University of Montana in 1981.

Before joining the Wake Forest faculty, Professor Grebeldinger worked as an associate at Sherman & Howard from 1985-90. She became a partner in the firm in 1991. She served as a law clerk for the U.S. Court of Appeals for the Tenth Circuit from 1984-85.

The Joseph Branch Excellence in Teaching Award was established in 1985 to honor Wake Forest alumnus Joseph Branch (JD ’38, LLD ’83) upon his retirement from the North Carolina Supreme Court.  Branch embodied the humanistic, student-centered approach to legal education that is the law school’s heritage. Recipients are chosen from the School of Law faculty on the basis of outstanding teaching and service to the legal profession.

“Professor Grebeldinger brings the world of practice into all her classes,” Reynolds added.  “The projects she gives her students blend doctrine and skills in a way that empowers students and makes them feel ready to practice law.”

The Provost added that one student says of Professor Grebeldinger: “She is my new gold standard for teaching. She wastes no time and kept us engrossed throughout the entire class.”

Another student says, according to the Provost, “It’s clear she sincerely cares for her students.”